You know those movies where the protagonist is an underdog, or they have a huge challenge and you watch them struggle to achieve their goal? You know that scene at the end of the movie where against all odds, they are victorious?

If you read my post The Day I Sang for the First Time in Ten Years, you will know of my battle to overcome a single experience that affected me for a decade. In that post, you saw a video of me singing on Facebook Live in a grand effort to break through my fear.

Even though it was liberating and a huge step for me, it wasn’t enough. I knew I would have to sing in front of actual people, face to face, in order to REALLY triumph.

So last month, I sang a solo in front of about 30 women and girls at a church talent night. (I sang a gorgeous arrangement of Be Still My Soul–one of my favorite hymns. If you click on the link, you can get the same arrangement I sang.)

As I waited for my turn to sing, I got more and more nervous. I was sweating. I was shaking. All my positive self-talk and essential-oil-sniffing was doing me no good. I wasn’t expecting a heartwarming movie ending where I sang the song perfectly and everybody cheered. I was just hoping to sing somewhat close to “the best of my ability.”

I did not sing somewhat close to the best of my ability. In fact, it was the worst public performance I had ever given. Even worse than the one ten years ago that started this whole descent into the pit of paralyzing fear. My nerves completely hijacked everything. My prayers didn’t help. My visualizations didn’t help. My voice cut out on numerous occasions. It was, in a word, pathetic.

When I was done, I went into the bathroom and cried. Then I went home and cried myself to sleep. The next morning, I was still crying.

Before I sang, I told myself that no matter what happened, I would feel great because I had overcome my fear. I had stared it in the face and dared it to stop me. I had pressed on even when the outcome was uncertain, to say the least.

And now I have twice the reason to try again. I’m not going to stop singing for ten years again. It was naive of me to expect that I could just get up and sing in public and miraculously have the voice of an angel. It was thoughtless of me to ask God to make my performance beautiful when I had not put in the time or effort to make it so.

At first, I felt a sort of frenzied desperation and came up with a plan to sing a song every week on Facebook Live for a year. THAT would surely help me overcome my fear, right? Then I thought I could ask to sing in church a lot, but that would seem narcissistic and would be serving myself–not God. When talking to others, they say that the only thing that calms the nerves is experience. In other words, singing frequently in public. I know that when I first started playing the organ in church, I was petrified and panicked at the same time. But now that I have done it so often, I’m rarely nervous at all. Even when I know that I’ll probably make a mistake and EVERYBODY will hear it. (You cannot hide mistakes on a church organ in front of a congregation of hundreds of people!)

You know what else? I sang 95% of the notes well. I sang in tune. My voice just cut out a few times. It was soft and breathy, but that’s better than loud and screechy. So statistically speaking, I got a solid B. That’s not failing.

For now, I’m just singing in the choir–blending my voice with the voices of others, and hoping that in time, I’ll be able to sing Be Still My Soul (my new vocal nemesis) in public again. And this time, it will be beautiful. (And I’m still contemplating the whole Facebook Live idea).

Now when I think about this experience, I feel at peace. I remember my favorite quote: “A life lived in fear is a life half-lived.” You know what? I bombed my performance. But I didn’t let fear stop me from trying. I didn’t half-live my life. And THAT is a victory. 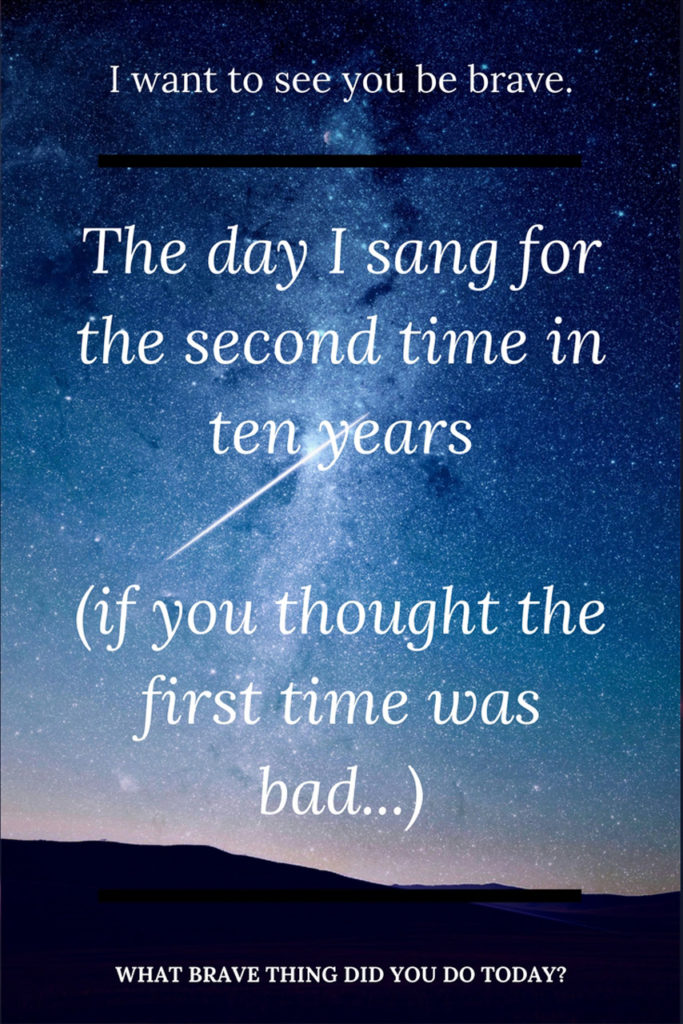