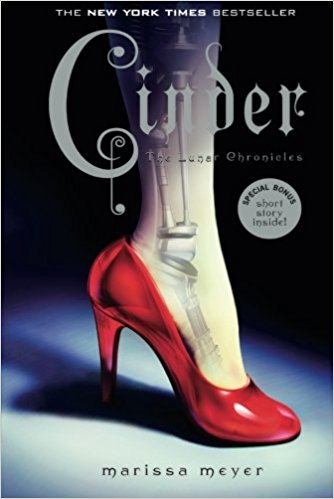 I am constantly reading books. While most of them are self-help, motivational, or business books, I do enjoy some teen fiction. Today I’d like to share with you my absolute favorite series in this genre by Marissa Meyer. It is a dystopian fairy tale reimagining of four favorite stories–Cinderella, Little Red Riding Hood, Rapunzel, and Snow White.

In Cinder, we are introduced to our inventive, resourceful heroine, who just happens to be a cyborg. Stick with me here. It’s not as crazy as it sounds. She was in a terrible accident as a child and one of her legs was replaced with a mechanical, artificial limb from the calf down. Shunned by her adoptive family, she spends her days in her little shop on the streets of New Beijing, fixing androids and other mechanical things. One day, the crown prince stops by with a request that she fix his favorite android. An android that just might have critical intel that could lead to the overthrow of Queen Levana, the wicked ruler of the Lunar people (who live on the moon, of course). But Queen Levana has already put a nefarious plan in motion to take over earth, and it just might be too late to stop her.

Scarlet takes us to France where we meet another headstrong young heroine who lives with her grandmother. Little does she know of her grandmother’s past with the Lunars. When her grandmother goes missing, Scarlet sets out to find her with the help of a street fighter named Wolf. When Cinder shows up on the scene, the plot thickens as they try to discover her grandmother’s secret, and stay one step ahead of Levana.

Cress is my favorite book in the series and adds our “Rapunzel” character. But instead of being locked in a tower, Cress has spent most of her years orbiting the earth on a satellite, spying on earth for Queen Levana. After being rescued by the handsome, daring Captian Thorne (with whom she immediately falls in love), they join Cinder, Prince Kai, Scarlet and Wolf in a desperate bid to out-run and out-smart Queen Levana before it’s too late.

Winter is the step-daughter to Queen Levana, and has been secretly undermining her for years. When Cinder and her entourage of rebels arrive on the moon, they have one last chance to end Levana’s plans with the help of Winter, or earth will pay the price.

I love this series. It’s clever, inventive, thrilling, romantic, and funny. Unlike some other dystopian fiction (The Hunger Games, The Maze Runner, Divergent), this series is balanced with some comic relief and is not overly violent. My 15-year-old daughter and I have both read the series twice, and we will probably read it again! If you are looking for a great, fun series for yourself or a teenager, this tops my list.

You can order any of these books from Amazon by clicking on my affiliate links.