This recipe for Liege Waffles (without pearl sugar) is a type of Belgian waffle that is made with yeast and copious amounts of butter! Though pearl sugar is traditionally used, it’s very expensive and difficult to find (in the United States), so my recipe uses easy-to-find Turbinado sugar instead. And instead of long rising times and rolling and shaping dough, this recipe uses a simple scoopable batter that gives you rich, buttery, crispy-on-the-outside, tender-on-the-inside waffles in a fraction of the time as other Liege Waffle recipes! 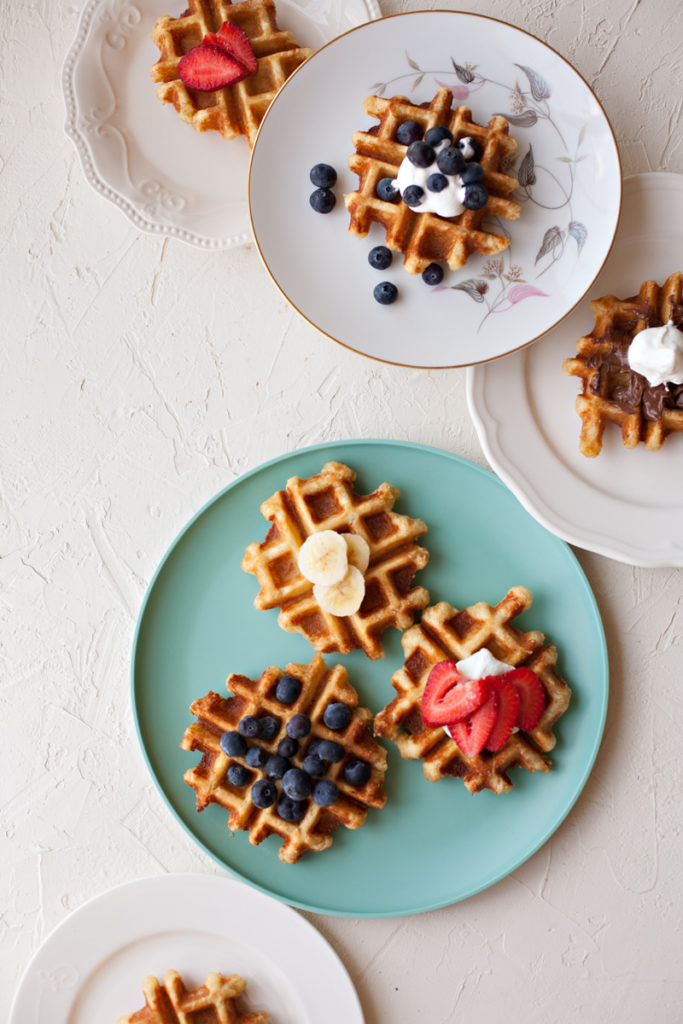 Technically, all “Belgian Waffles” will have yeasted dough. However, what we know as “Belgian Waffles” here in the United States were actually invented in America and made their debut at the 1964 World’s Fair.

They are large, round waffles (typically the size of a plate) with deep pockets. They’re also usually made with baking powder instead of yeast. Sometimes whipped egg whites are added as well. Search the internet, and you’ll find loads of different recipes for these large, round waffles.

Brussels Waffles are made with yeast and whipped egg whites and are rectangular with large pockets.

Liege Waffles are also made with yeast, but are small, irregularly-shaped (sort of round) waffles that have the wonderful addition of crunchy caramelized sugar. Traditionally, pearl sugar (little balls of polished sugar) is used. However, I’ve never been able to find this at any store in America. You can order it off of Amazon, but the cheapest I’ve found is around $12.00 a pound. (All links to Amazon on this website are affiliate links).

Liege Waffles are so named because of the city in which they were invented. I actually visited the city of Liege in Belgium and had one of their famous waffles! It was divine, and I knew I had to learn to make them at home! 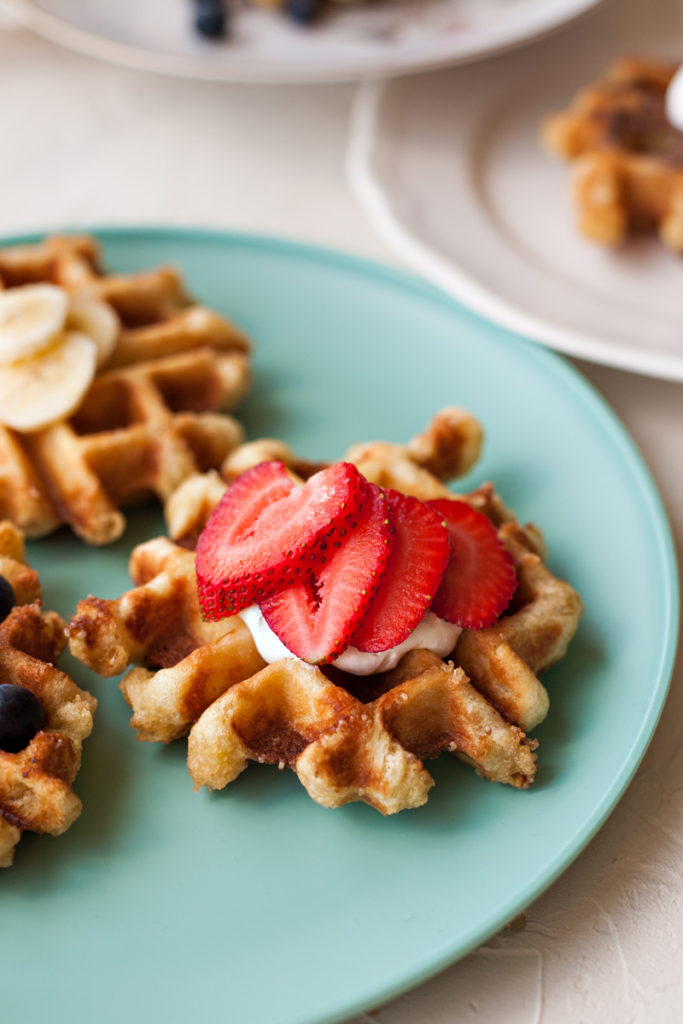 Instead of using the hard-to-find Belgian pearl sugar, I make my Liege Waffles with Raw Turbinado Sugar. You can find this at any store in the baking section. It’s large crystals of brown sugar, and it works wonderfully well in these Liege Waffles! (And unlike the expensive pearl sugar, you can get a five-pound bag of Turbinado sugar for the same price  as a single pound of the pearl sugar!)

So, let’s get started making these Belgian Liege Waffles!

We have this one from Black and Decker. I love it, because you can cook two waffles at once!

You’ll need some non-scratch tongs to remove the waffles from the waffle iron.

The waffles are really soft when you first remove them from the iron. I typically grab them with tongs, then slide them on top of a large pancake turner so I can transfer them to a plate or wire rack without having them fall apart during transport.

How to Make Liege Waffles

Here are step-by-step instructions with pictures so you know you are doing it right!

As you’re making these waffles, you might be thinking, “This can’t be right! This mixture is too dry!” Or, “Holy cow, that’s a lot of butter! I don’t think it’s ever going to mix in!”

Don’t worry. Just trust me and follow my instructions, and everything will turn out beautifully. I make these every year for Christmas morning, and this recipe has never let me down.

Add 2 1/4 teaspoons of yeast to 1/3 cup of warm water. Sprinkle about 1/4 teaspoon of sugar over the top to help it develop.

Step 2: Add your flour and salt to a large mixing bowl or bowl of a stand mixer.

(A Kitchen Aid mixer is great with the paddle attachment, but I’ve also made these completely by hand with a large bowl and wooden spoon).

You’ll use two cups of all-purpose flour and 1/8 teaspoon of salt.

Step 3: Add your proofed yeast mixture to the flour and blend on low speed.

Here’s where you’re going to think, “This is too dry and crumbly!” True–there’s not a lot of moisture here to mix with the flour. Things will look wonky for a minute, but don’t worry. 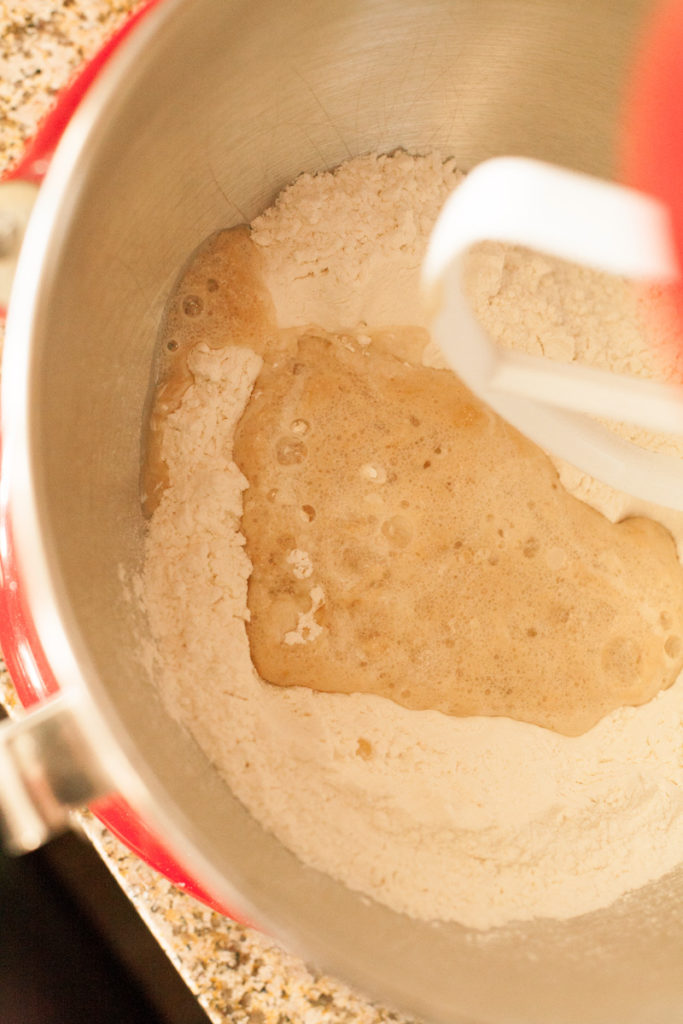 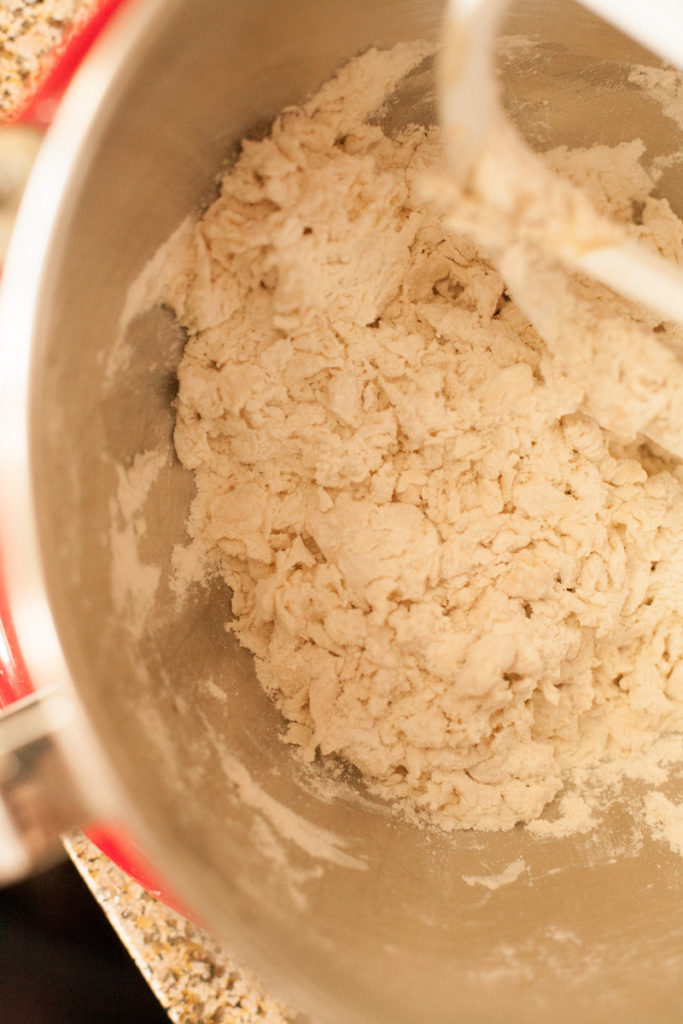 Crack one egg, then blend. Then another. Then another. You’ll use three eggs in total. (You can use room temperature eggs if you want, but I never bother. I just use them straight from the fridge). 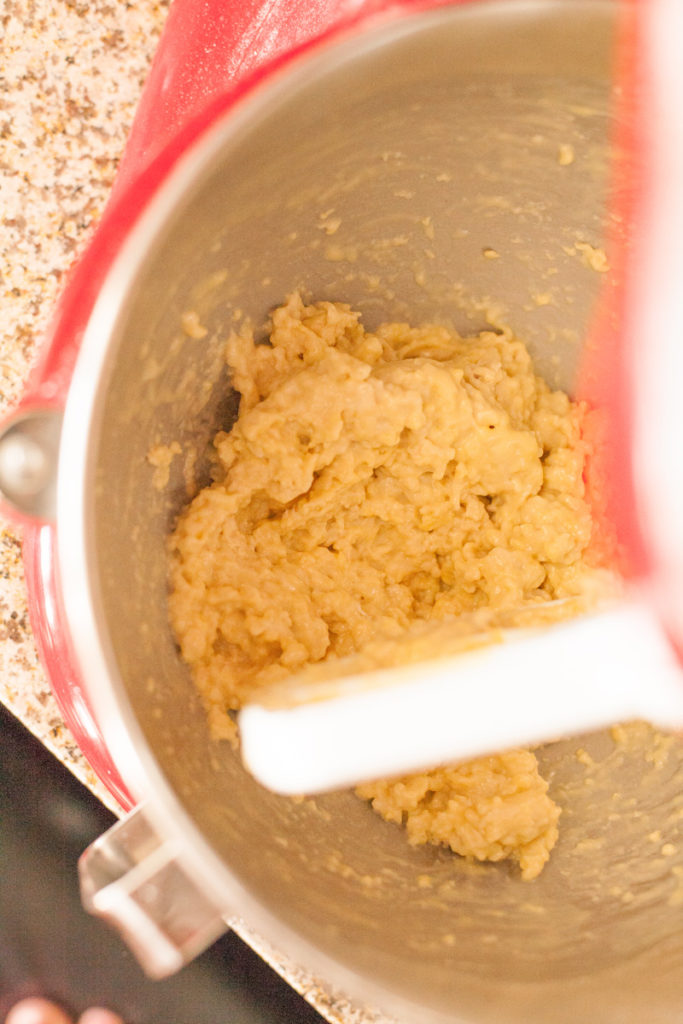 Step 5: Add the melted butter. (I use salted butter).

You’re going to slowly add an entire cup of melted butter. (Melt two cubes of butter). Add just a little, then mix. Add a little more and mix some more. It’s going to seem like an AWFULLY lot of butter. Again. Everything is as it should be. Don’t fret.

Step 6: Add the vanilla (and some cinnamon, if desired).

Add a teaspoon of vanilla extract, and about 1/2 teaspoon of cinnamon, if you want. (This is totally optional). Mix.

At this point, your batter will look very lumpy, very wet, and very sticky. It’s perfect! 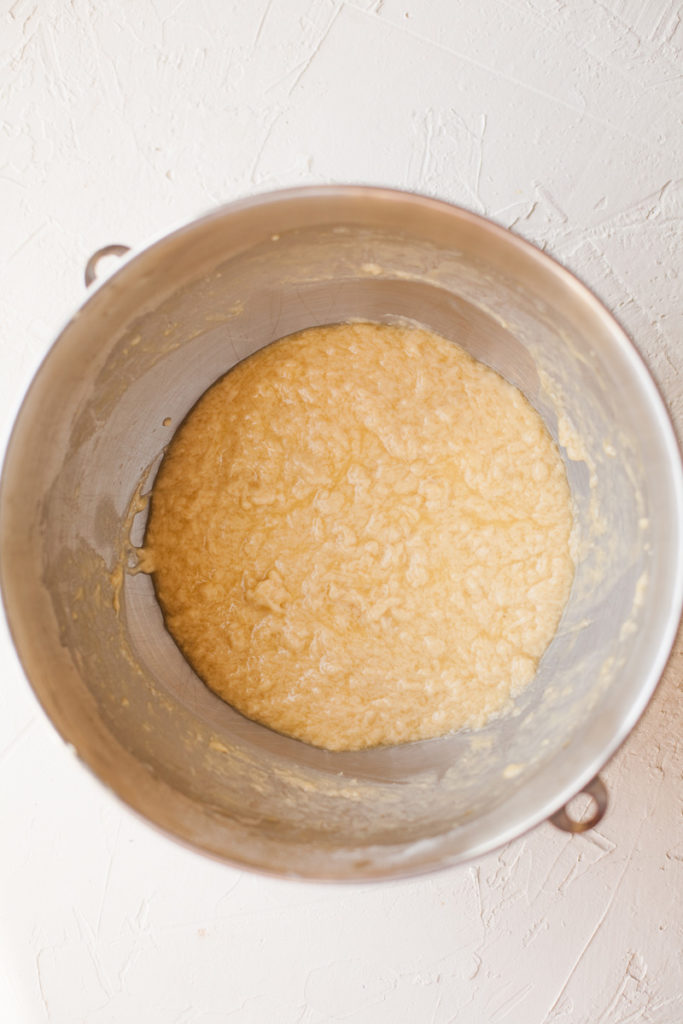 Step 7: Allow the batter to rise.

Cover the bowl with plastic wrap and set in a warm place to rise until doubled in volume. This can take about an hour (shorter or longer, depending on how warm your kitchen is).

This is what it looks like when it has risen: 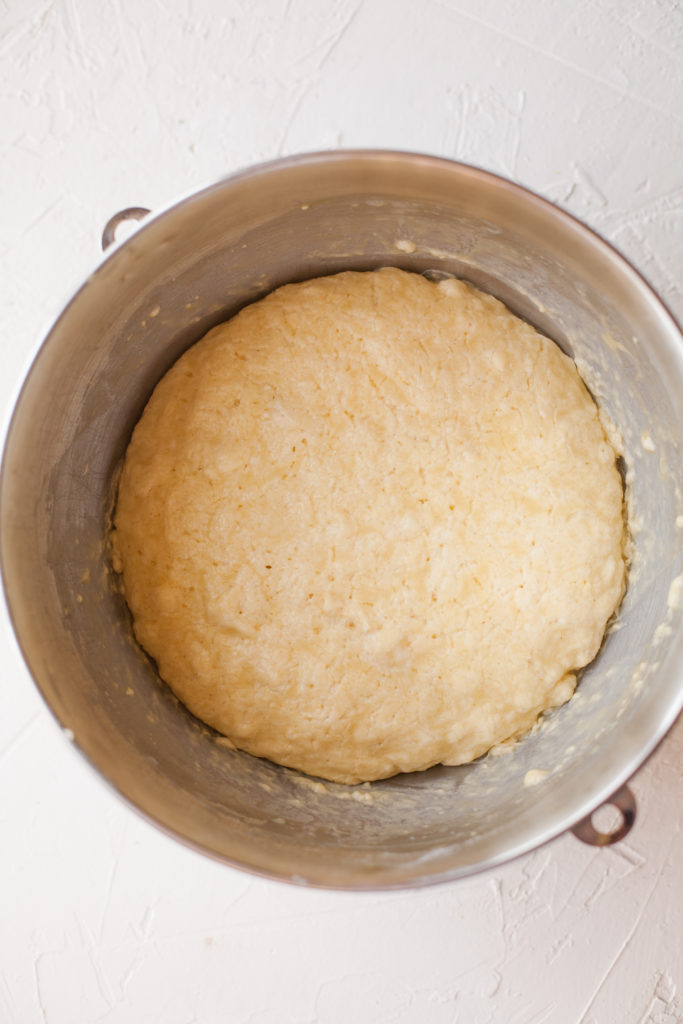 I use 1/2 cup of raw sugar crystals. This provides just the right amount of sugar distribution and opportunity for caramelized sugar edges on these waffles. 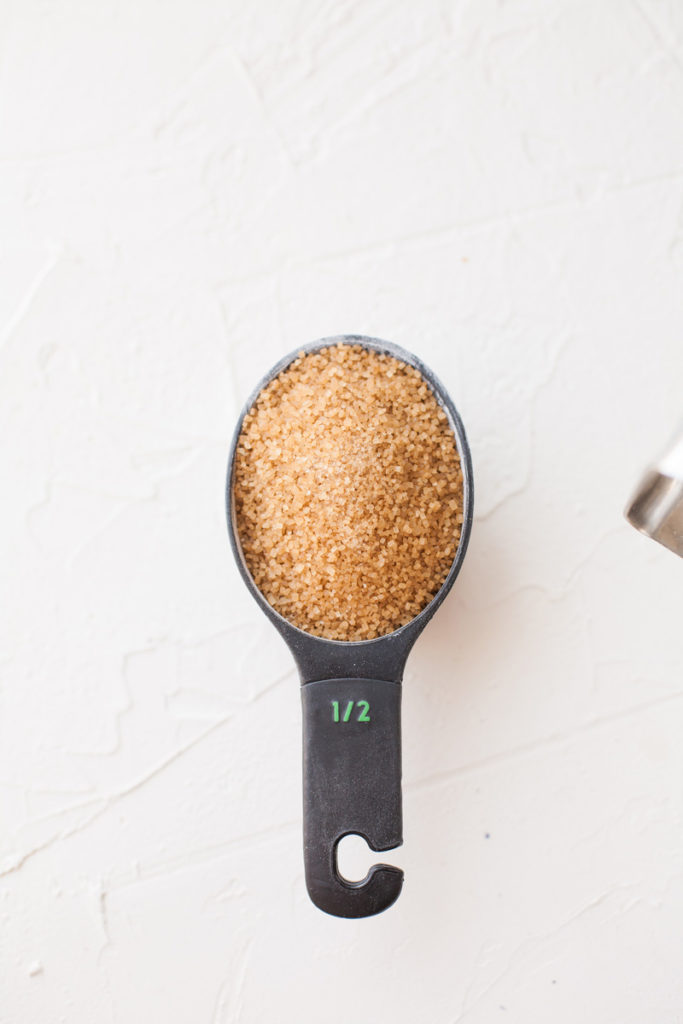 Using a rubber spatula or wooden spoon, gently fold the Turbinado sugar into the dough. You need to do this by hand (and not in a mixer) because you want to be careful not to knock all the air out of the dough. 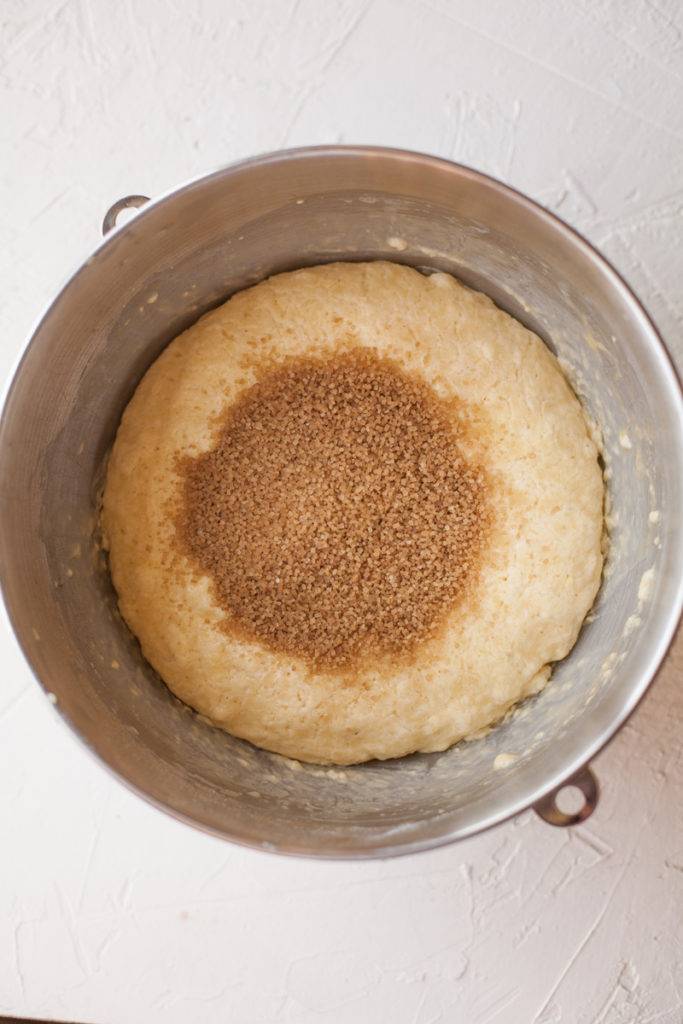 When you’re done folding in the sugar, your batter should look like this: 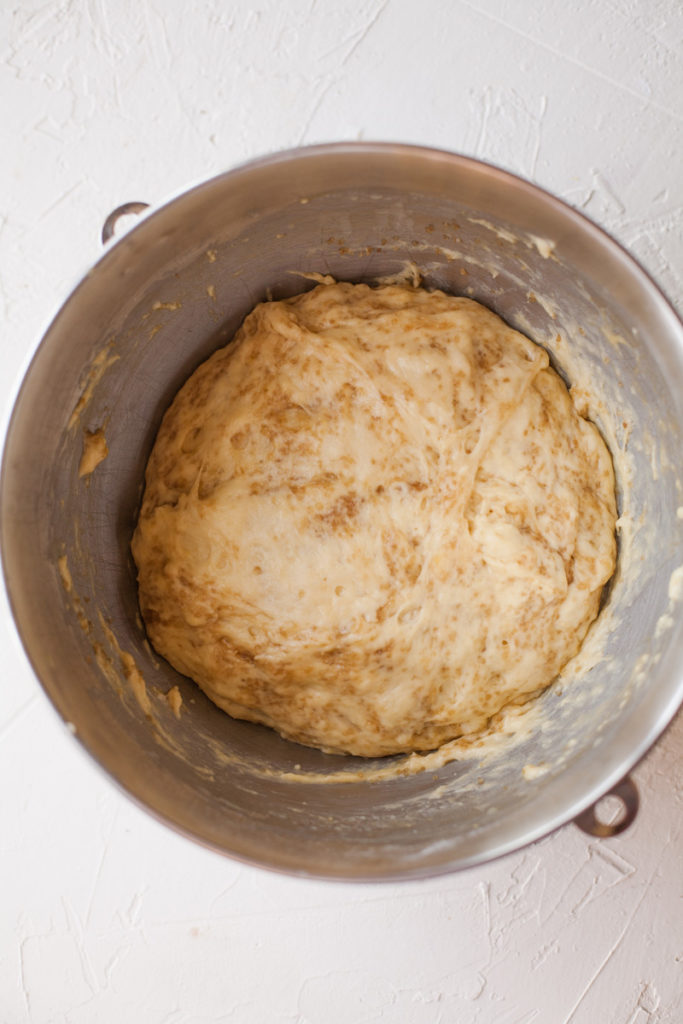 Allow your dough/batter to rest for about fifteen minutes while you heat up your waffle iron. Again, you’ll want to use a Belgian Waffle Iron (a round one) as opposed to a rectangular or square waffle iron. (However, if that’s all you have, go ahead and use it).

Do NOT grease your waffle iron! There is so much butter in these things that they fully grease the iron as they cook. There will be no sticking whatsoever. 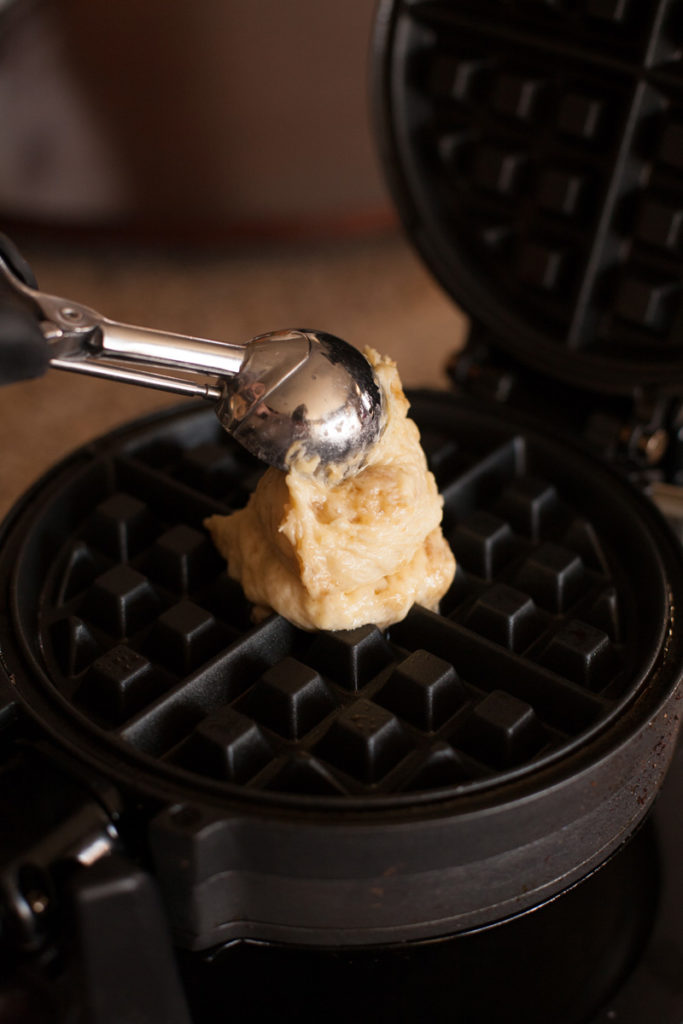 Cook until the edges start to turn golden brown. The time will depend on how hot your waffle iron is. (Start checking after a minute). 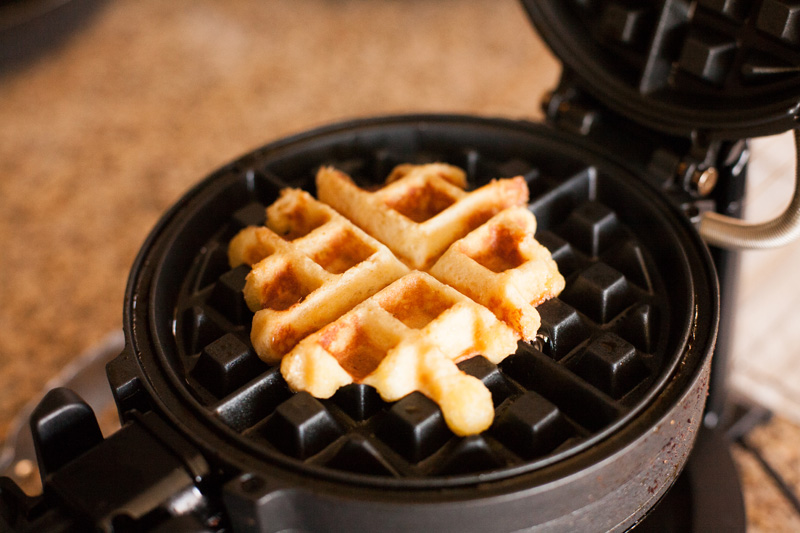 Step 10: Remove from waffle iron, let cool for a few minutes, then eat!

To remove the waffles from the waffle iron, I grab an edge with a pair of non-scratch tongs, then slide the waffle onto a large pancake turner so it doesn’t break.

I place the cooked waffles on a plate or wire rack to cool slightly. As these cool, they firm up so that the outsides get crispy, while the insides stay wonderfully pillowy. This happens really quickly (within a minute or two) so you don’t have to wait long before you dig in!

We love to serve these waffles with Nutella, whipped cream, and lots of fruit! Other toppings could be maple syrup, peanut butter, chopped nuts, chocolate chips, jam, and more!

Some people even like to top theirs with ice cream (which makes this a dessert–not a breakfast. But let’s be honest–this really is dessert for breakfast anyway!) 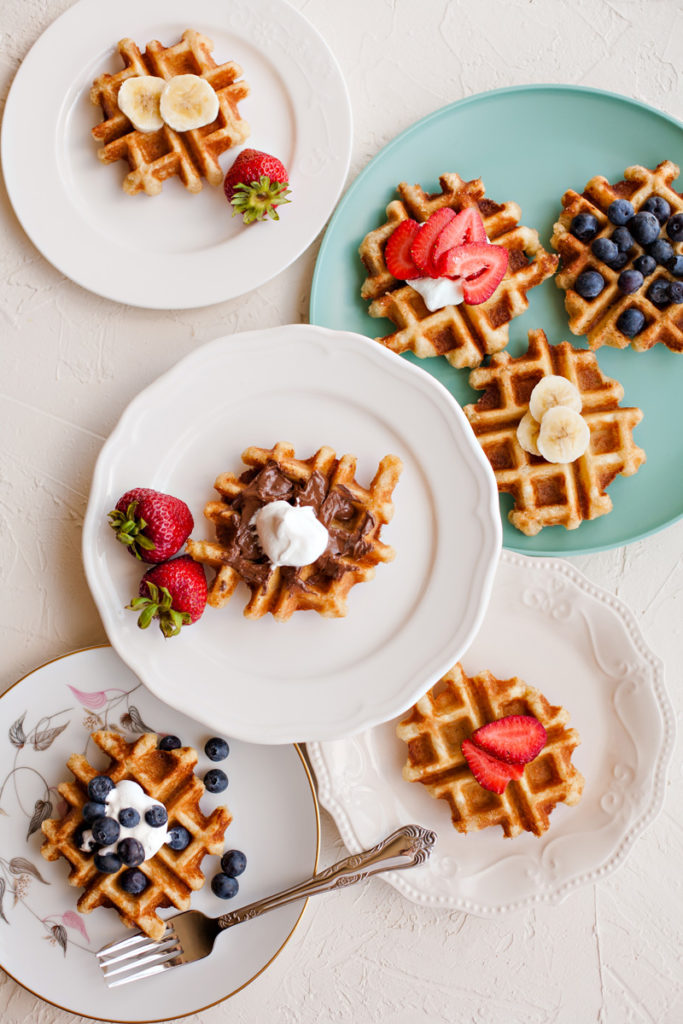 They are also fantastic on their own, with no toppings whatsoever.

WARNING: These are not a low-calorie food! That’s why we only have them once a year! But everybody in my family looks forward to them so much! They are quite simply the best waffles you will ever eat! 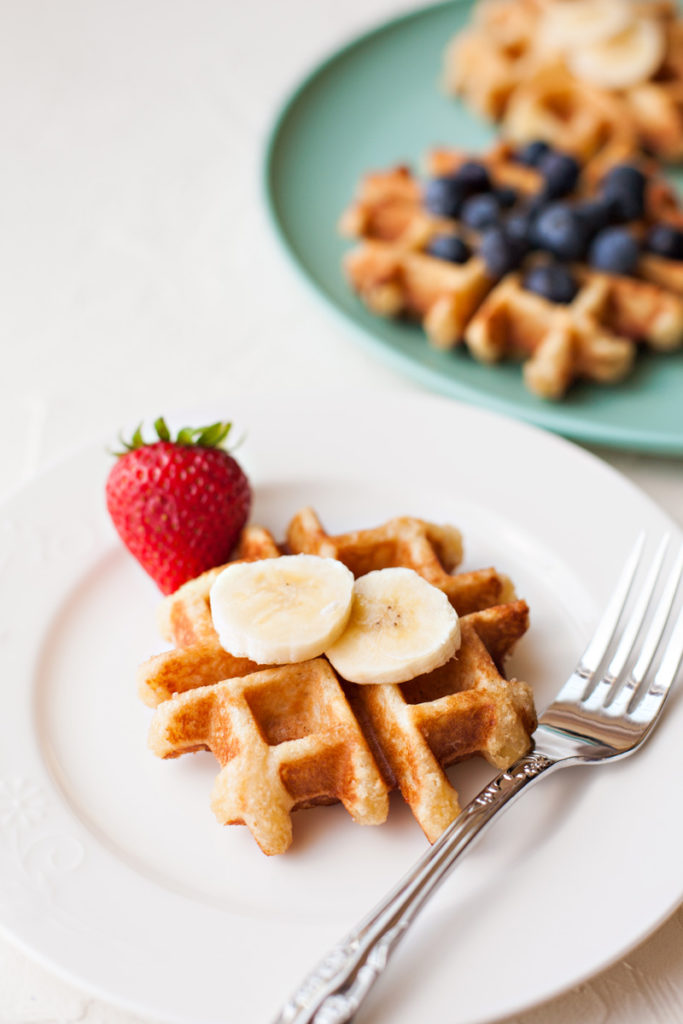 How to store Liege Waffles

Place any leftover waffles on a plate and cover with plastic wrap. Store in the refrigerator for up to a week.

How to reheat Liege Waffles

If you want to retain the pleasant crunch, don’t reheat these in the microwave. The best way to reheat these is in a toaster oven on a baking sheet. I cover my baking sheet with foil and then heat the waffle for a few minutes (on either the toast setting or at 350 degrees F.), until I can see and hear the butter sizzling. You don’t want to place these directly on the wire rack of your toaster oven, because butter will melt and drip into the bottom of your oven.

Alternately, you can use your regular oven to reheat these waffles. This is particularly useful if you want to reheat many at once. Just place them on a foil-lined baking sheet and reheat in the oven at 350 degrees F., uncovered for 2-3 minutes, until hot and sizzly.

How to freeze Liege Waffles

Place in an airtight container or airtight plastic bag and freeze. You can freeze them in a single layer, or stacked. It’s not necessary to put waxed paper or parchment paper between them. The butter in the waffles makes them pretty easy to separate from each other, even when frozen.

Rather than thawing, it’s best to reheat these directly from their frozen state. Simply place them on a foil-lined baking sheet and put in a 350-degree oven for 7-10 minutes, until hot. (Oven temperature and times may vary. Check on your waffles often!)

Can I use sugar cubes instead of pearl sugar?

I wouldn’t recommend it. I’ve tried it, and it doesn’t work very well. Sugar cubes are just packed cubes of granulated sugar. They are too large to use on their own, so I tried breaking them down into smaller pieces. Still the result wasn’t nearly as good as using the large crystals of the raw sugar. 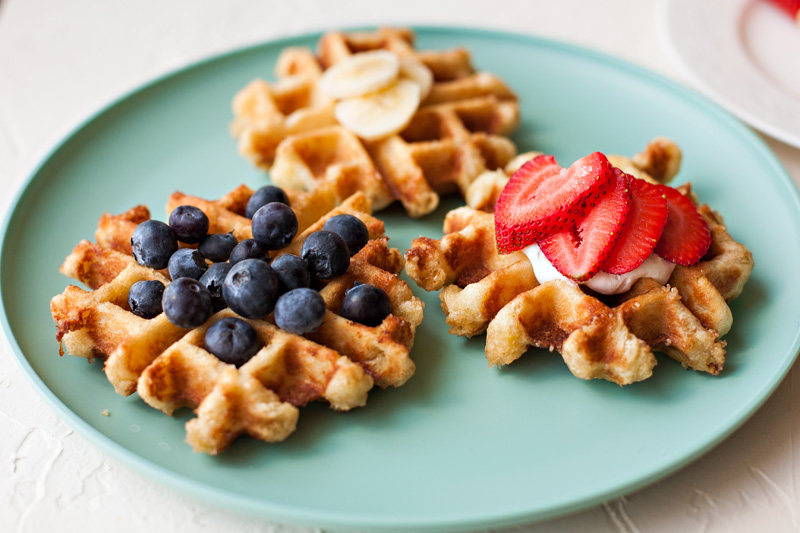 Be sure to scroll up into the body of the post if you have questions about storing, freezing, or reheating these waffles.

Choose your favorite to pin! 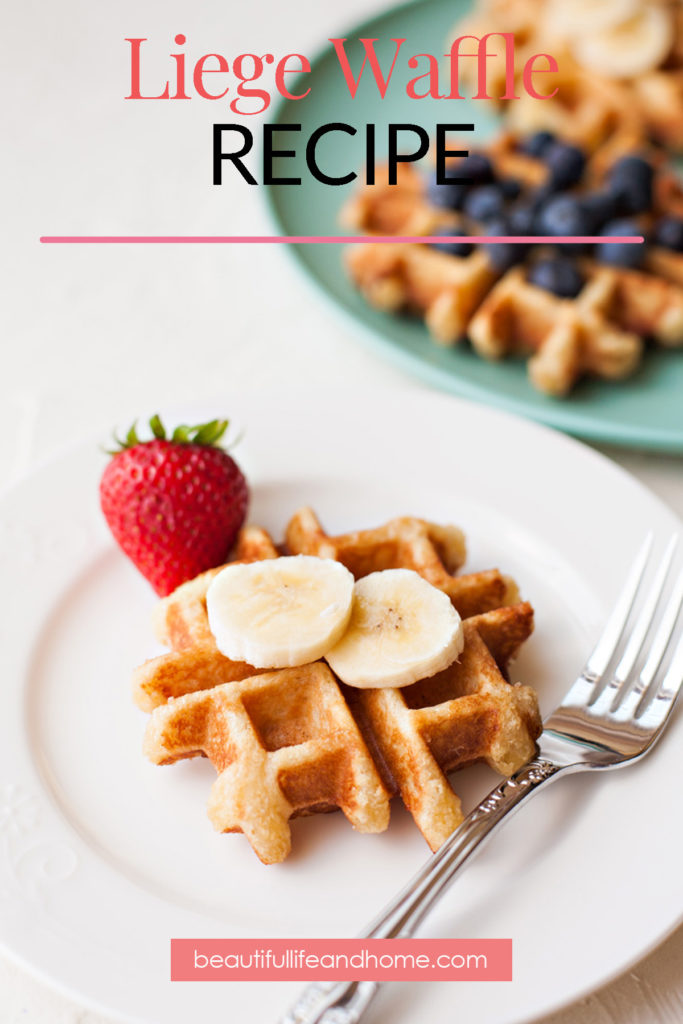 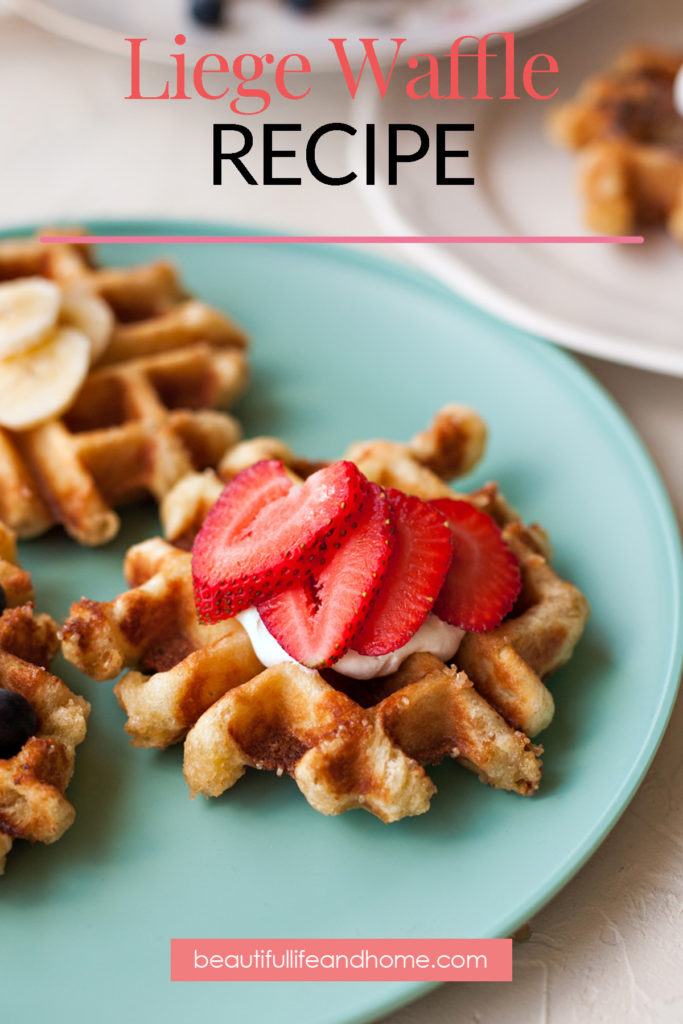 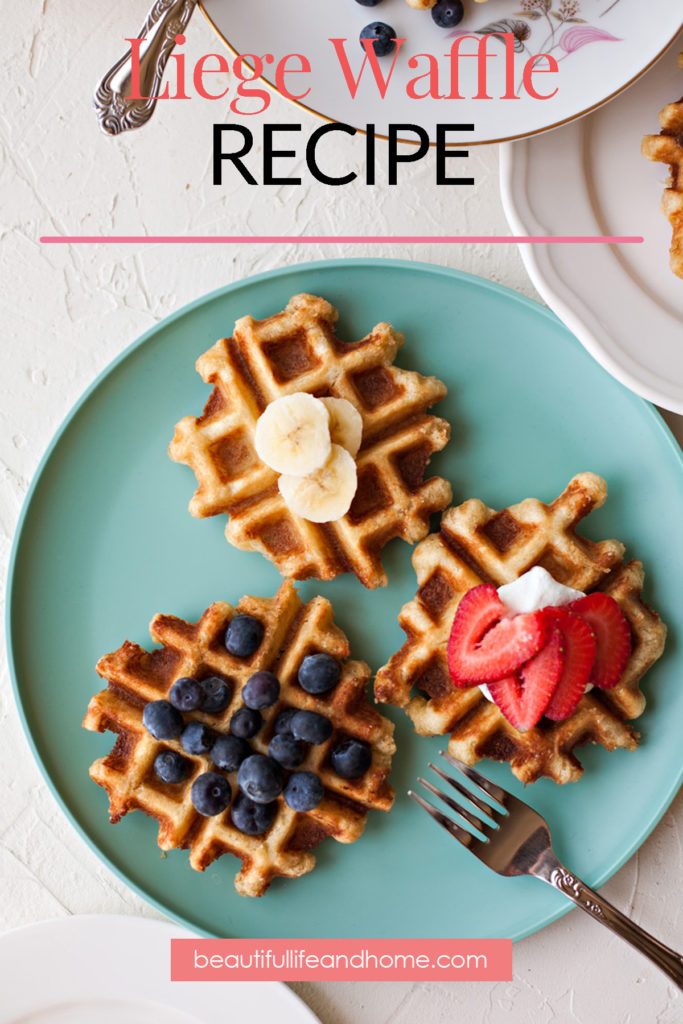