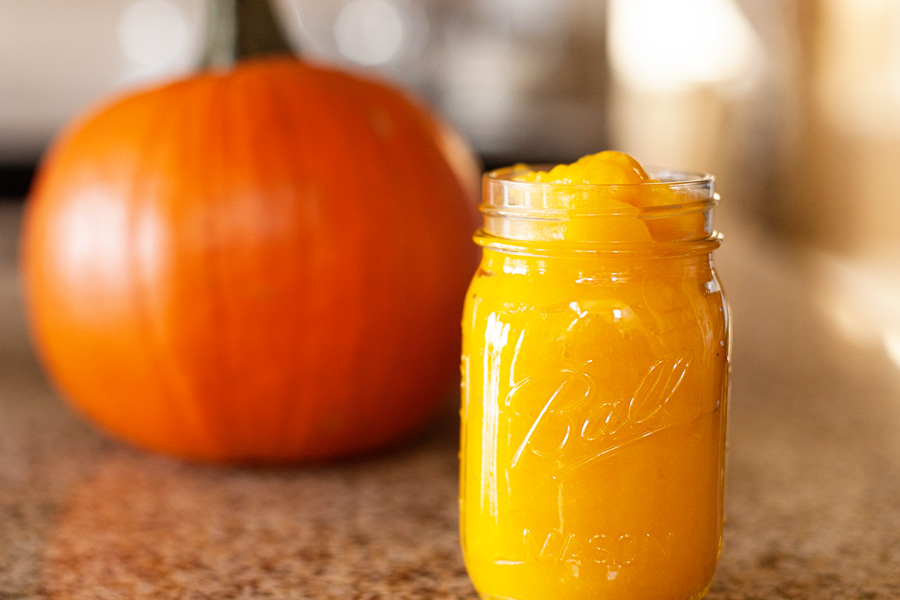 It is pumpkin season. Time for pumpkin pie and pumpkin bread and pumpkin cookies and pumpkin ice cream! Since I am a snob, I do not buy the pumpkin in the cans. Some years ago, I was professing to a friend the superiority of my homemade pumpkin puree to the stuff in the cans, which I assumed had all kinds of fillers and unnatural colors and so forth. She showed me the ingredients on the can. There was one ingredient. It was pumpkin. I was embarrassed by my know-it-all air of superiority, but not willing to abandon it completely. When you consider that one can of pumpkin makes one pumpkin pie, and that each can of pumpkin puree costs about $2.00, you will see that making your own puree at home is much more economical, and therefore, superior to using pumpkin from cans. From this one pumpkin, which I bought for $5.00, I got enough puree to make 14 pumpkin pies!

O.K. I should say something else. If you purchase those little “pie pumpkins” and make your own puree, your cost will be closer to what you pay for the cans. This puree is darker orange and thicker than puree from large pumpkins. However, I have not found a difference in flavor or texture when using my own puree in baked goods. So I will continue with the tradition of making my own pumpkin puree, and stocking my freezer with all the pumpkin I could ever want.

Here’s how you do it. Get yourself a big, honkin’ pumpkin. 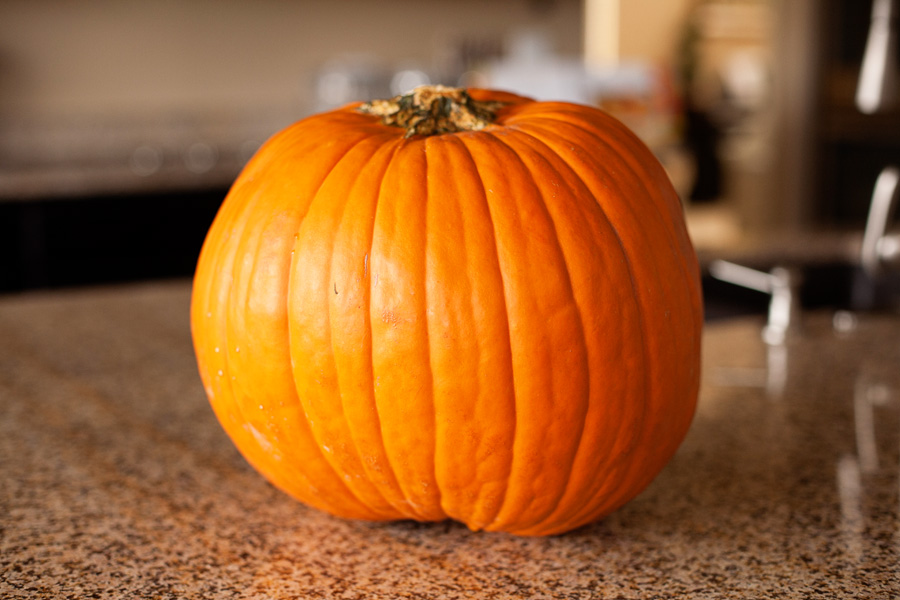 Next, get yourself a big, honkin’ knife, such as this one. Notice how I cleverly blurred out the tip of the knife so that you could not see that it was broken off due to an unfortunate incident involving me stabbing a can from which the pull-tab had broken off. 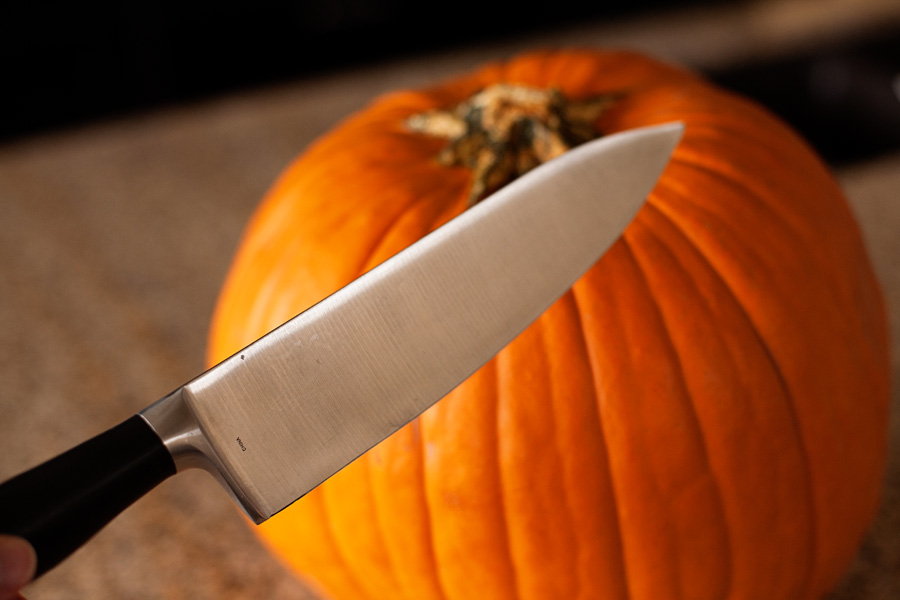 Now cut around the top, just like you were going to carve a jack-o-lantern. You need to get all the guts out of this pumpkin. After removing the “lid,” get a big spoon and scrape out the insides. After that is largely ineffective, just reach your hand in there and yank out the innards. 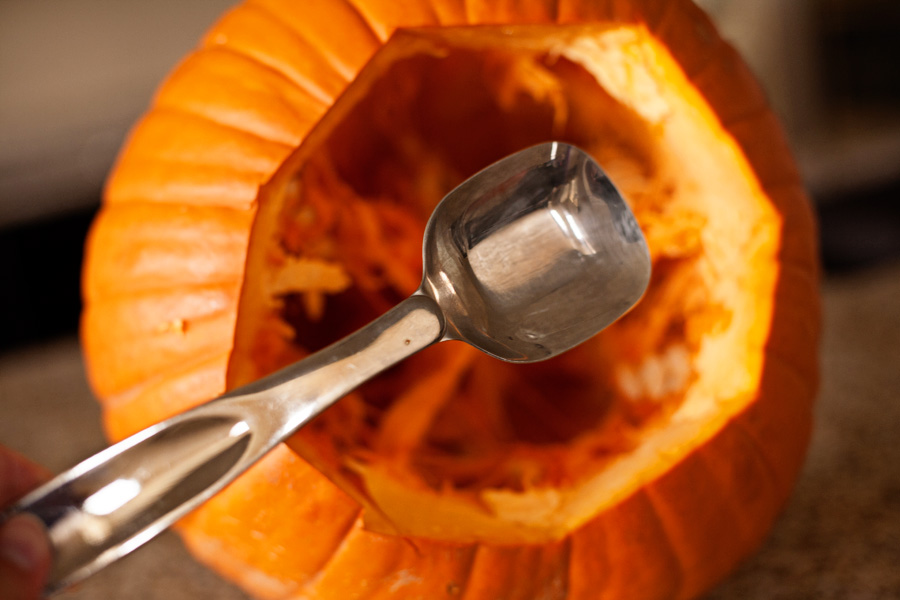 Next, put the lid back on the pumpkin and place the entire pumpkin on a heavy-duty foil-lined baking sheet. In the past, I have cut up the pumpkin into large chunks before baking it. This was difficult, and I always worried that I might inadvertently lop off one of my arms in the process. This year, probably because I dyed my hair brown and am no longer subject to the inherent stereotypical lack of intelligence due to my blonde hair, I realized that it would be much easier to bake the whole pumpkin first. Yeah. It only took me like ten years to figure that out. 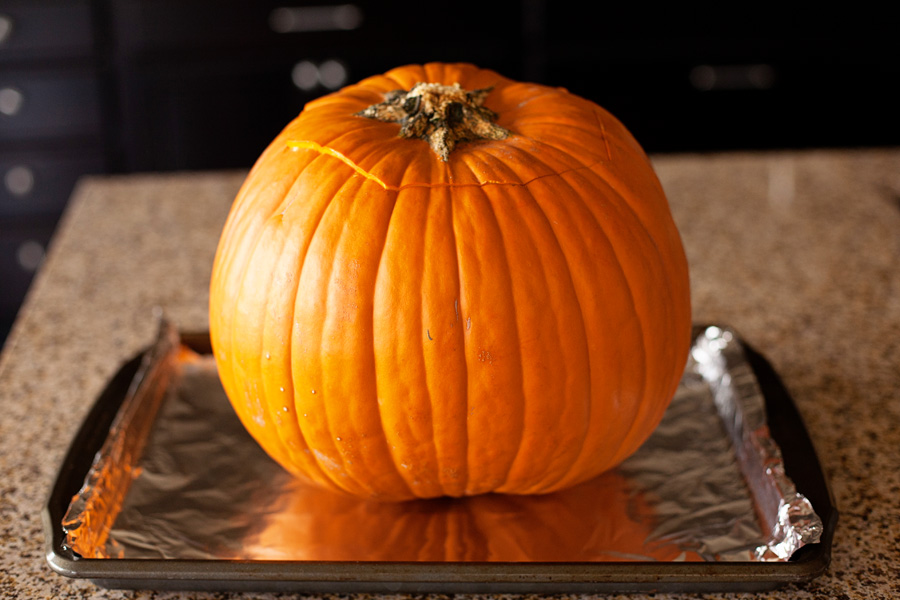 Move your oven rack to the next-to-lowest position and turn on your oven to 350 degrees. (You actually probably should have done this earlier so you wouldn’t have to wait now. Why didn’t you think of that? Maybe YOU are blonde).

When the oven is ready, carefully insert your pumpkin and bake for one to one-and-a-half hours, depending on the size of the pumpkin. I baked this one for one-and-a-half hours. I stabbed it to see if a knife would go in easily, but the tough outer skin makes it difficult to get a good read on how soft the inner flesh actually is. So I slid the tip of my knife just under the lid and tested it there. Even if your pumpkin is slightly underdone, you can still make puree with it just fine. 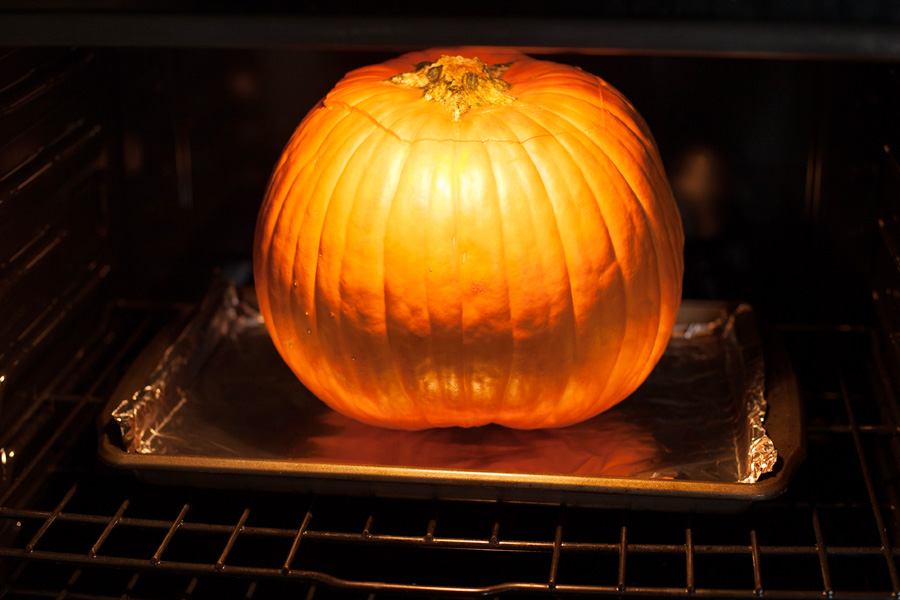 When the pumpkin comes out of the oven, it should look like this: kind of sad and droopy. 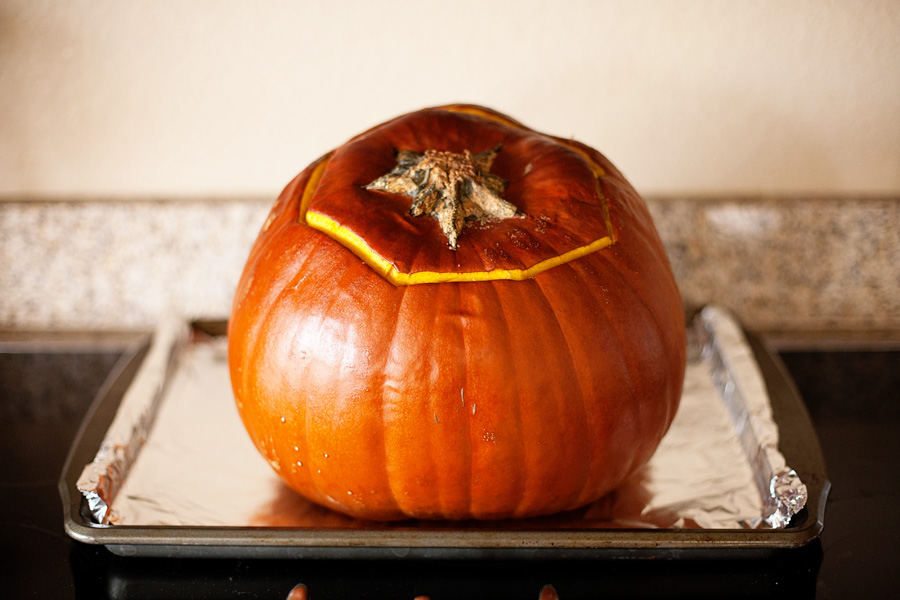 Carefully lift the lid off (I slid my big, honkin’ knife under it to lift it up) to allow the pumpkin to cool. I don’t let mine cool all the way, because I am too impatient for that. I just wait long enough not to get burned. 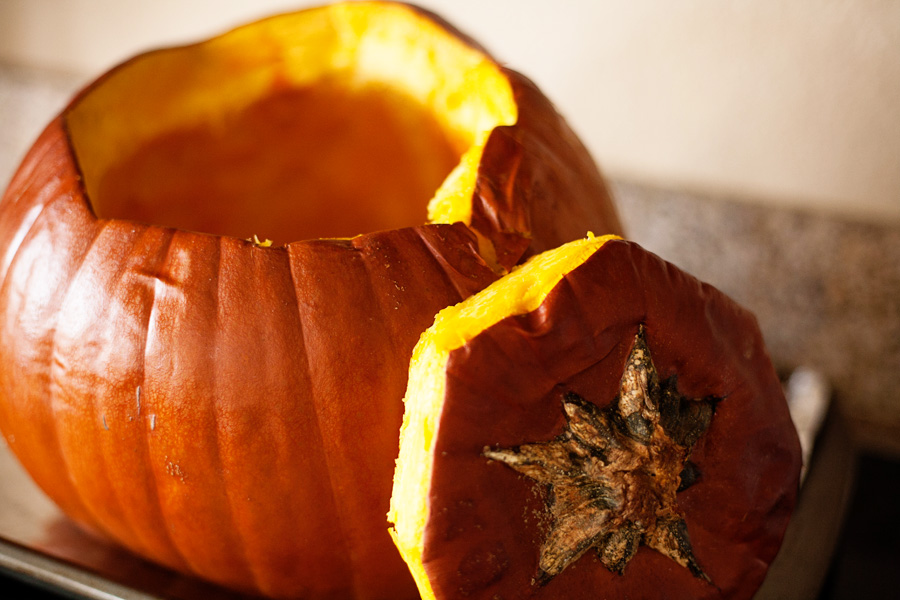 Now go get a manicure or eat bon bons or watch an episode of Gilmore Girls while you wait because you have nothing better to do with your time. After that, return to your pumpkin, and continue as follows:

Carefully transfer your pumpkin to a large cutting board, and cut it into large chunks. 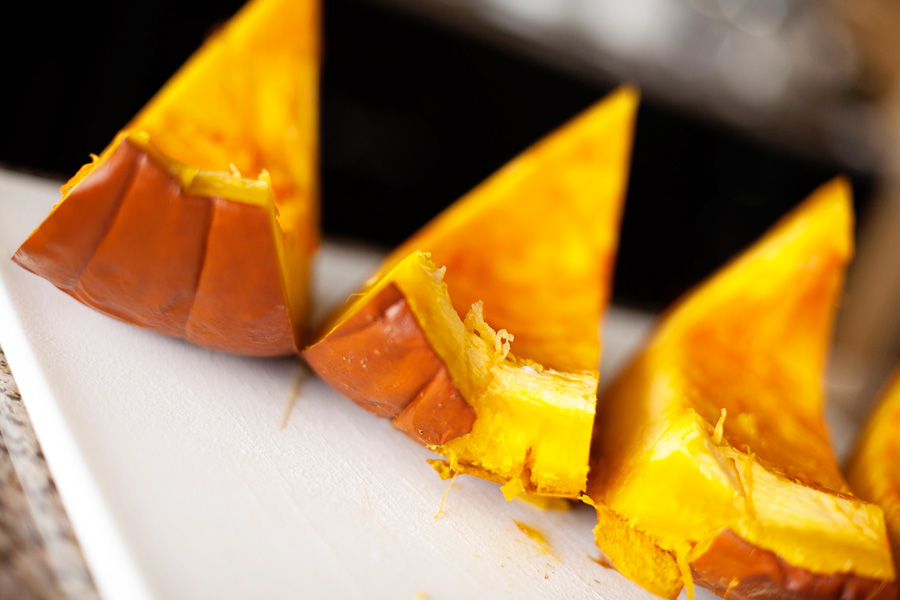 Then take your big, honkin’ knife and use it to remove the skin. 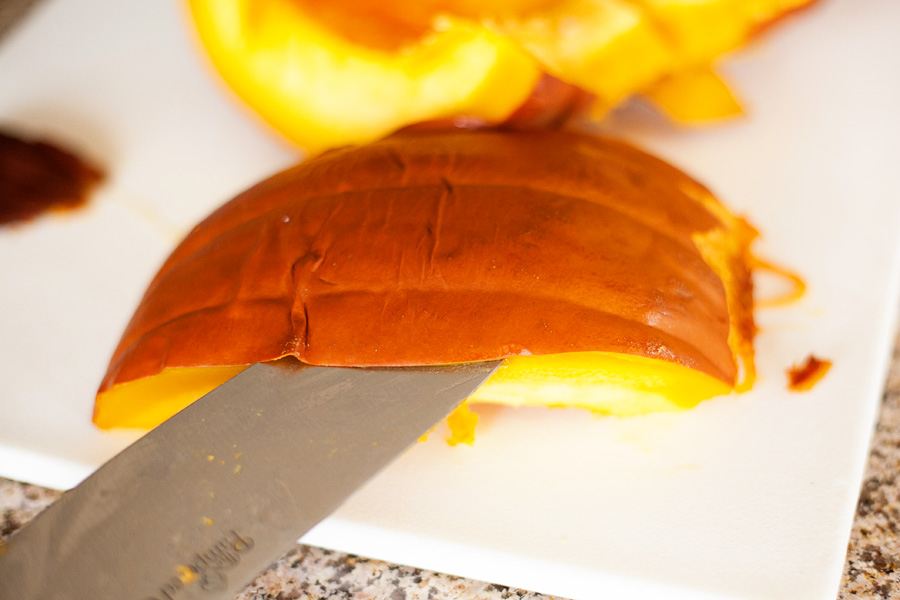 After that, chop up each piece into smaller chunks. The size of the chunks is up to you. Smaller chunks tend to blend better. 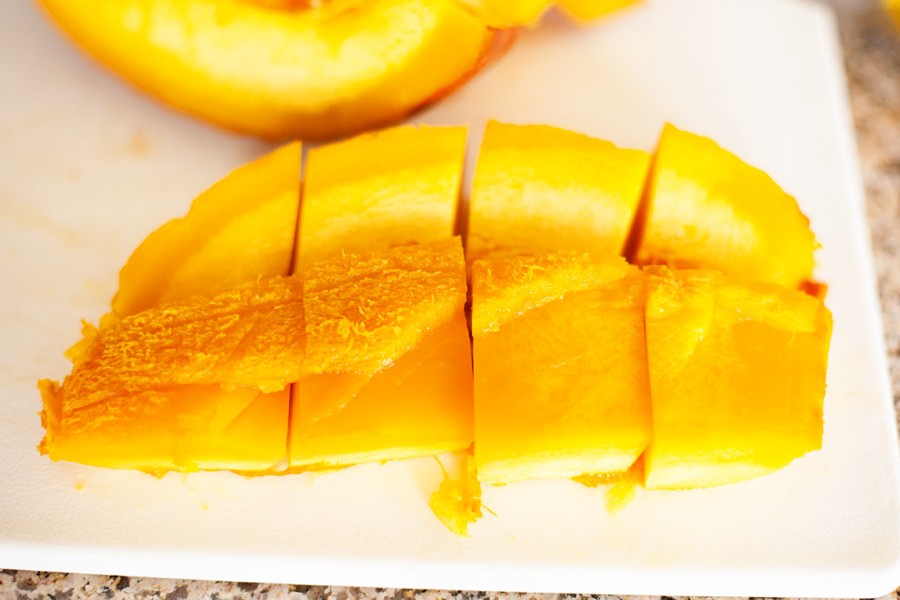 Put the chunks into the blender of your choice, and blend the heck out of the pumpkin. Make sure there are no chunks when you are done. When my mom makes her own puree, she uses a potato masher instead of a blender, and her pumpkin pies always seem a little too nutritious with all the chunks of pumpkin in them. Pies should not be nutritious. “Pies” and “nutritious” are oxymorons. 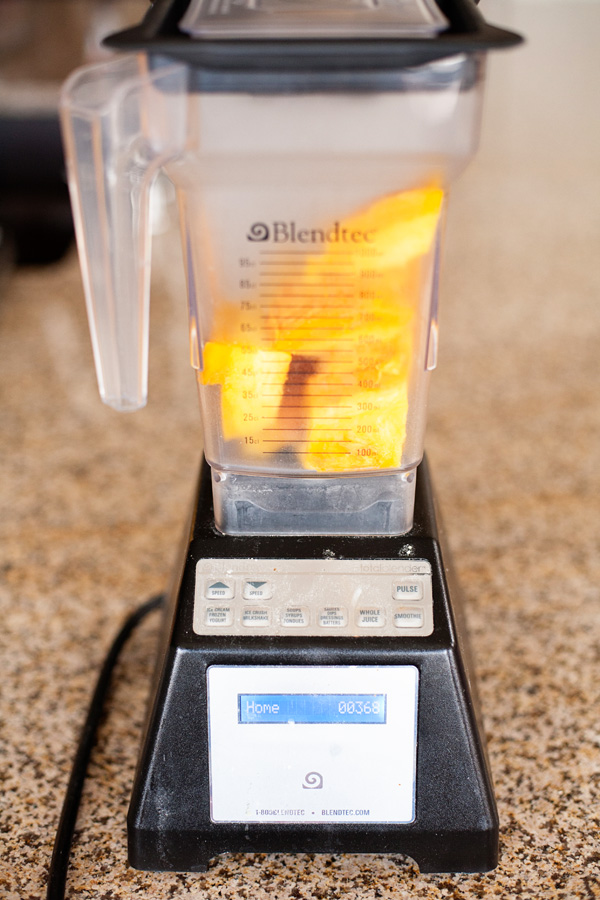 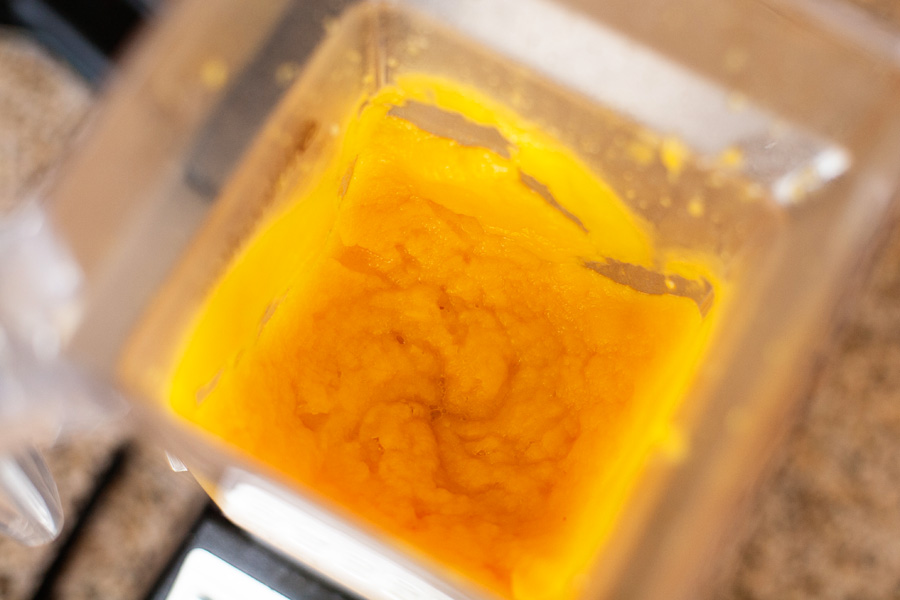 Now pour this puree into a big bowl. Keep pureeing and pouring until your bowl is full. 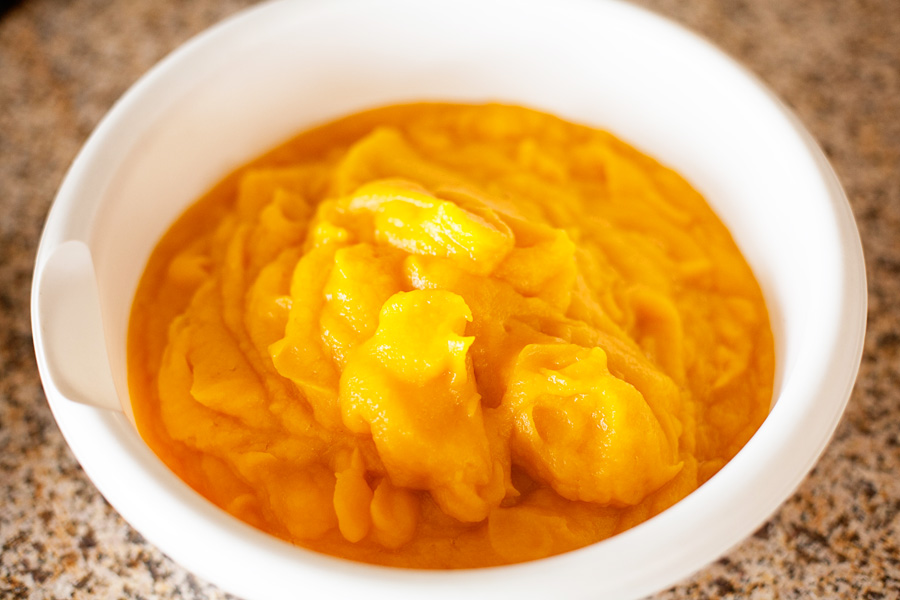 Now you need to start transferring the puree into plastic bags that you can put in your freezer. Get yourself some quart-sized freezer bags. Sure, you can use plastic sandwich bags if you like your pumpkin puree to leak all over your refrigerator when you are thawing it out. You need more heavy-duty freezer bags. Only took me like ten years to figure that out, too. Sheesh. Label your bags with the quantity and the date. I always put 1 1/2 cups of puree in a bag, because my favorite pumpkin pie and pumpkin bread recipes both use that amount. I can just thaw out a whole bag and dump it in without measuring again. 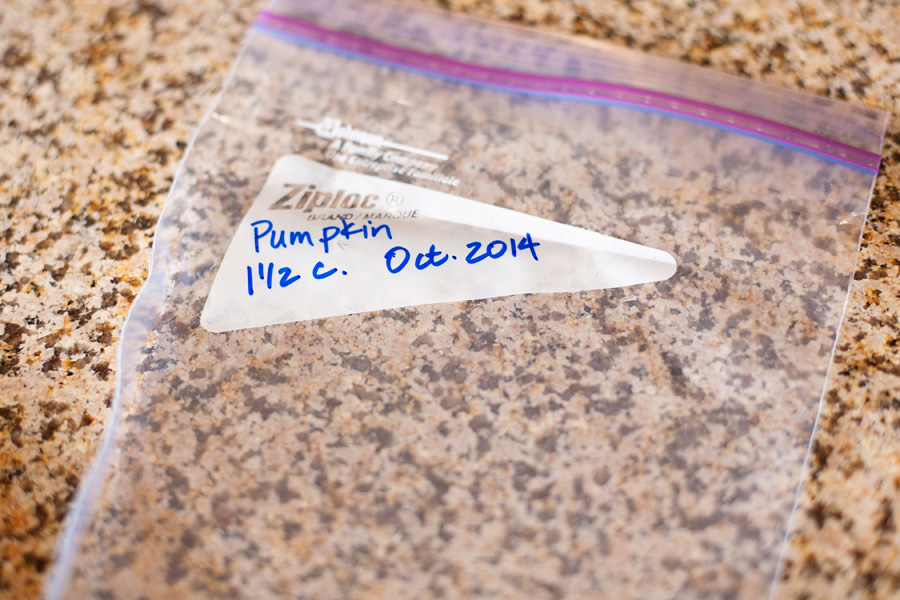 Next, get a large cup, and use your fist to insert the plastic bag. Fold the top of the bag inside-out over the top of the cup. (Does this make sense? I hope so. If not, I bet you can figure it out). 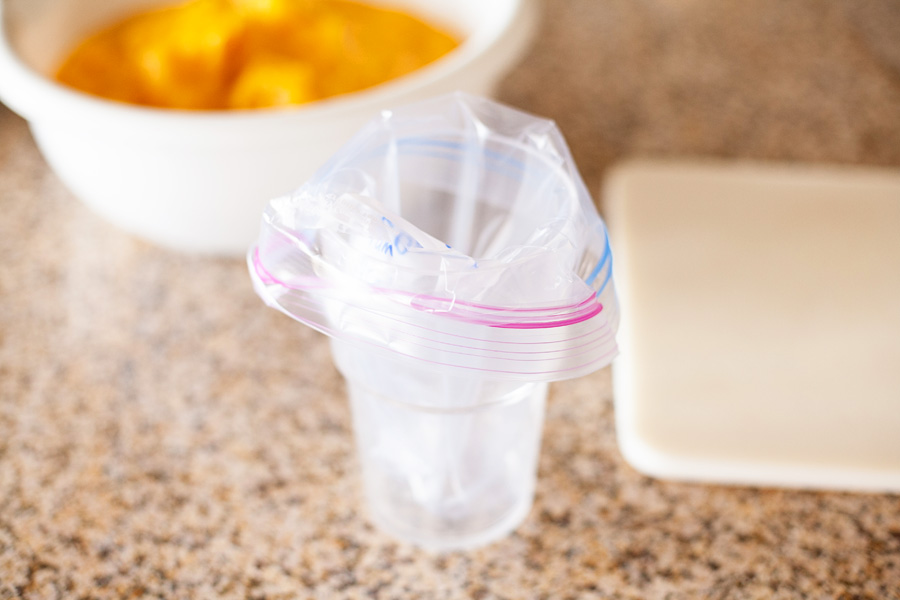 Now scoop up some puree, and pour it into the bag. 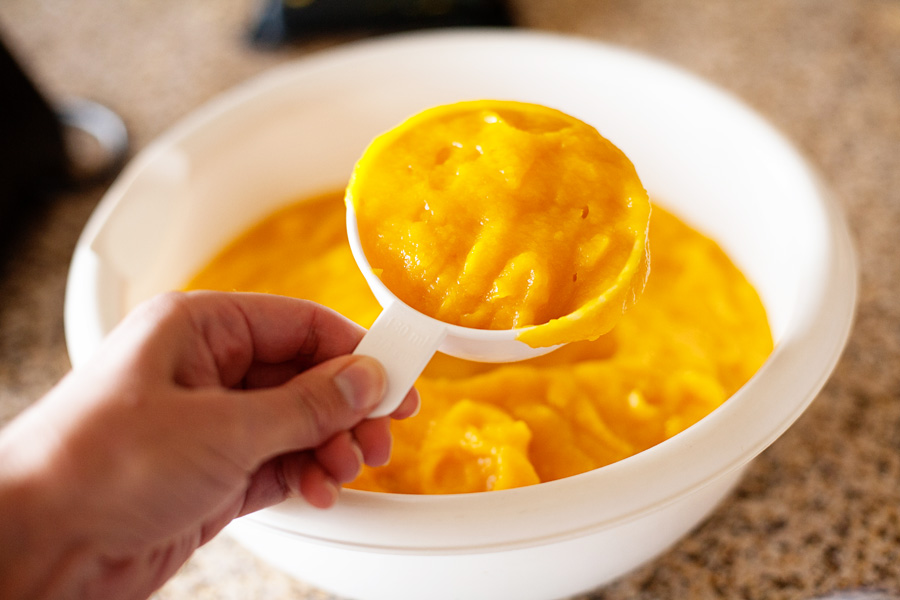 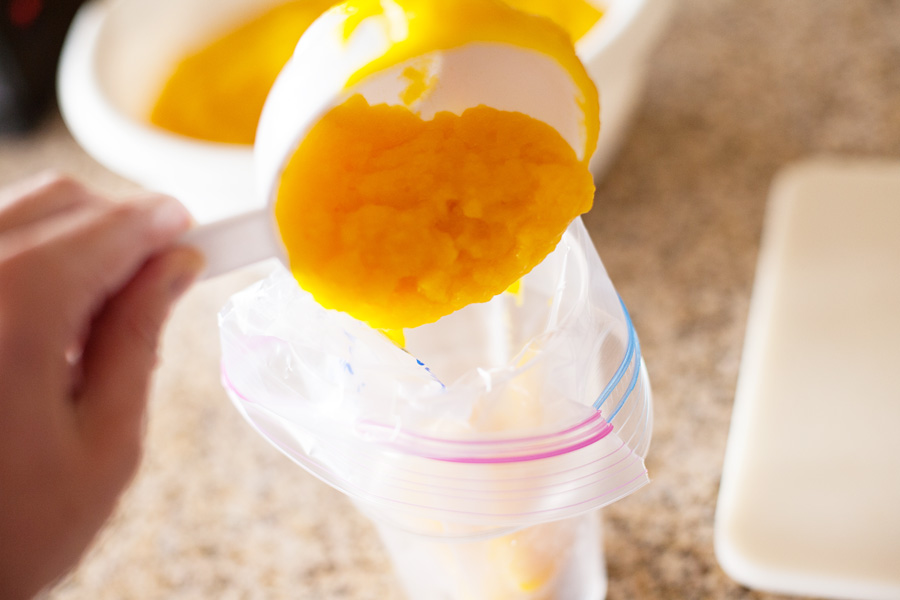 Then seal the bag (try to press out some air first) and you’re done! 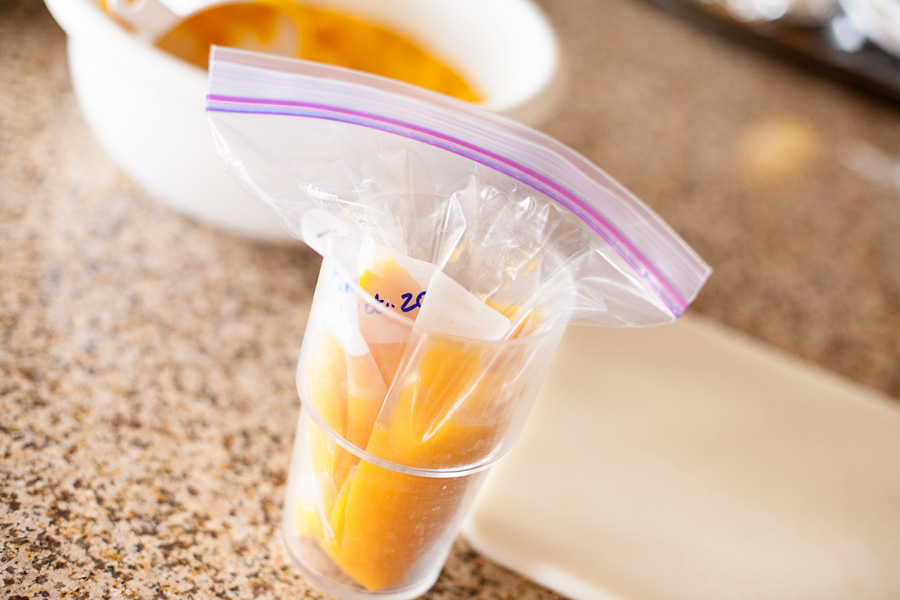 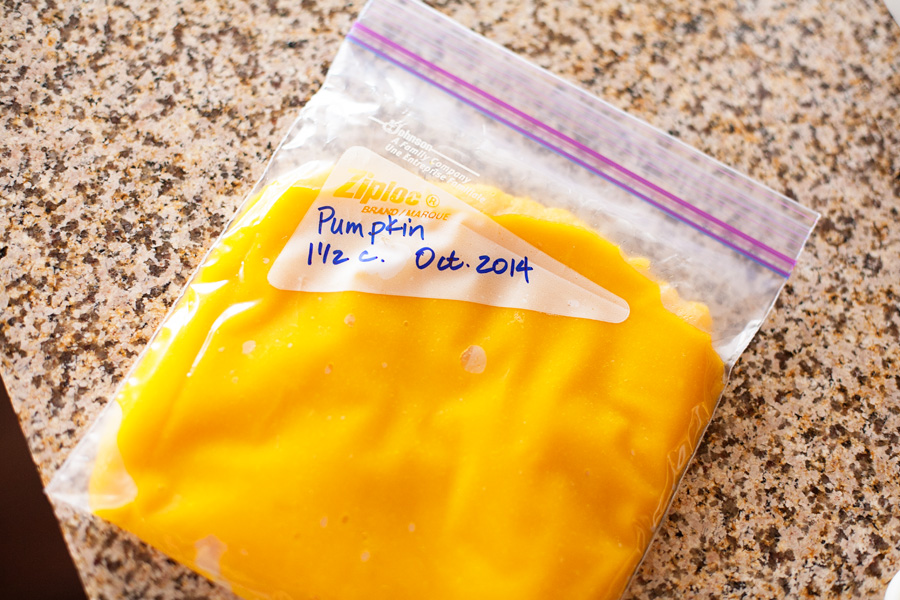 I like to lay the bag on the counter and press it flat. That way, it is easy to store and takes up less room in the freezer. Now you have pumpkin for all your baking needs! And for a fraction of the cost of the stuff in the cans. Go get a pumpkin now, because they’re really hard to find after Halloween.

Have you ever pureed pumpkin before? Do you have a different way to do it? I would love to hear about it in the comments!