Make this Hawaiian Monkey Bread for a tropical-themed breakfast or brunch! Pineapple, coconut, and macadamia nuts bring a taste of the islands right into your kitchen! (Not to mention a heavenly smell!) 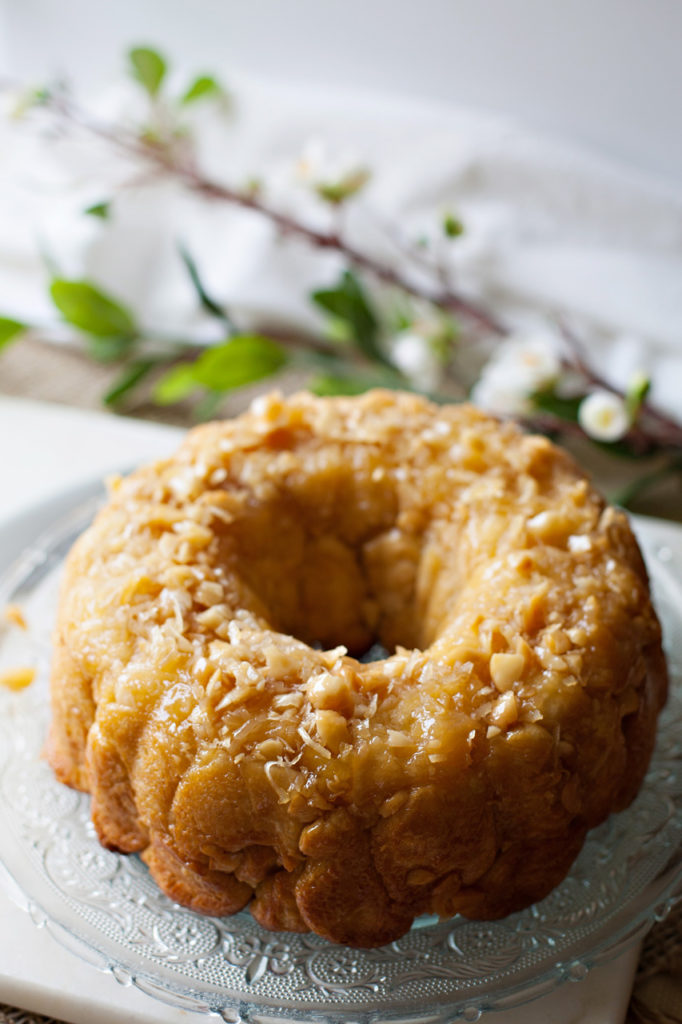 If you have never seen Monkey Bread and had just heard the name, what would you think it was? Bread made out of monkeys? (No, that’s so gross). Bread that looks like monkeys? (Also gross). I honestly would not know what to think. But I would wonder WHY it was called Monkey Bread. Well, just in case you have also been randomly thinking about Monkey Bread and wondering how it got its name, I have done a little research for you. According to Wikipedia, Monkey Bread is actually a Hungarian dessert, and the original name means “golden dumpling.” It has nothing to do with monkeys. It’s just called Monkey Bread because we EAT it like monkeys–by using our hands.

Mystery solved! Although traditional Monkey Bread uses cinnamon and pecans, I thought a Hawaiian variation using macadamia nuts, coconut, and pineapple would be amazing. I was right. I brought this to a party and people could not stop talking about it (or eating it).

There are two basic ways to make Monkey Bread. You can use biscuit dough, or yeast dough. I chose to use Rhodes Frozen Rolls for this recipe. (As a side note, I used to be a total snob about using frozen roll dough, but I overcame that and now I LOVE Rhodes Frozen Rolls. They don’t have any dairy or eggs in them, just in case you have people allergic to those things. That’s the end of my public service announcement. If you could order them from Amazon, I would have a link for you. Alas, shipping frozen rolls would present quite a problem, I would imagine).

To make this Hawaiian Monkey Bread, I got out 18 frozen rolls and set them on a lined cookie sheet. I covered them with plastic wrap and let them thaw in the refrigerator overnight. However, you can just let them thaw on the counter top for an hour or so rather than thawing them overnight. You just need them soft enough so you can cut them.

Once they are thawed sufficiently, I cut them into quarters. I used kitchen scissors, because they worked so much better than a knife. If you are going to use a knife, it is easier to cut the dough if it is still slightly frozen. If you don’t have kitchen scissors, you can just use regular scissors. Just make sure to wash them before and after you use them.

Monkey Bread is traditionally made in a bundt pan, so you’ll need one of those. First, grease the pan lightly with cooking spray. Then you’re going to start layering your balls of dough with chopped macadamia nuts, shredded coconut, and crushed pineapple. 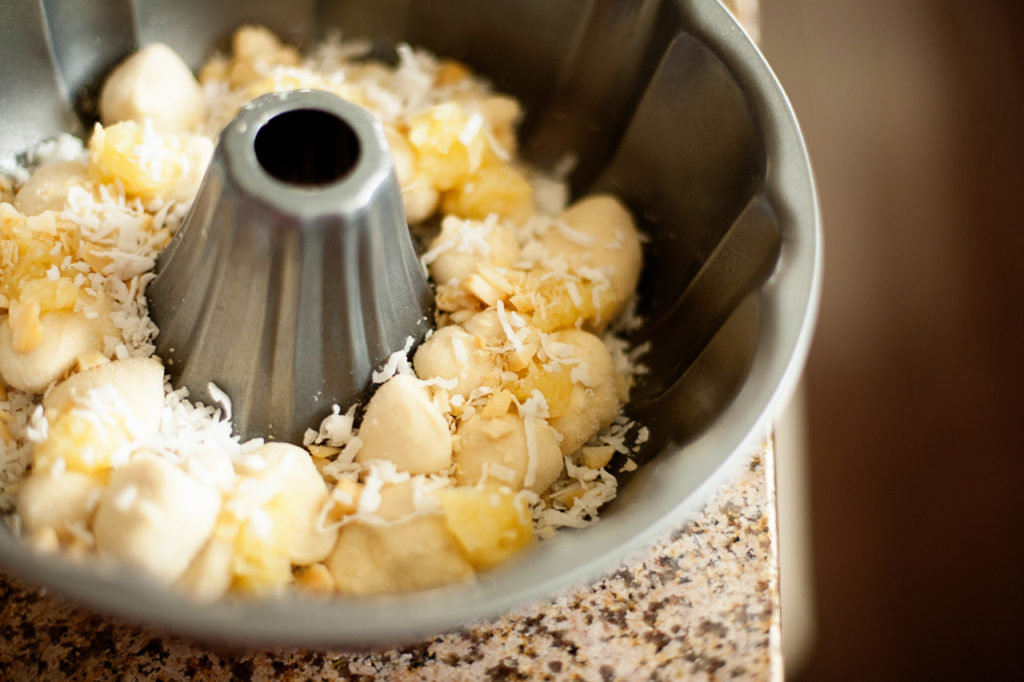 Then you’re going to make your secret sauce. It’s just butter and brown sugar, boiled together for one minute. Pour the hot mixture over the rolls and let everything rise for 1-2 hours, or until the rolls reach the top of the pan. (The time it takes to rise will depend on how frozen your rolls are, as well as the temperature of your kitchen). 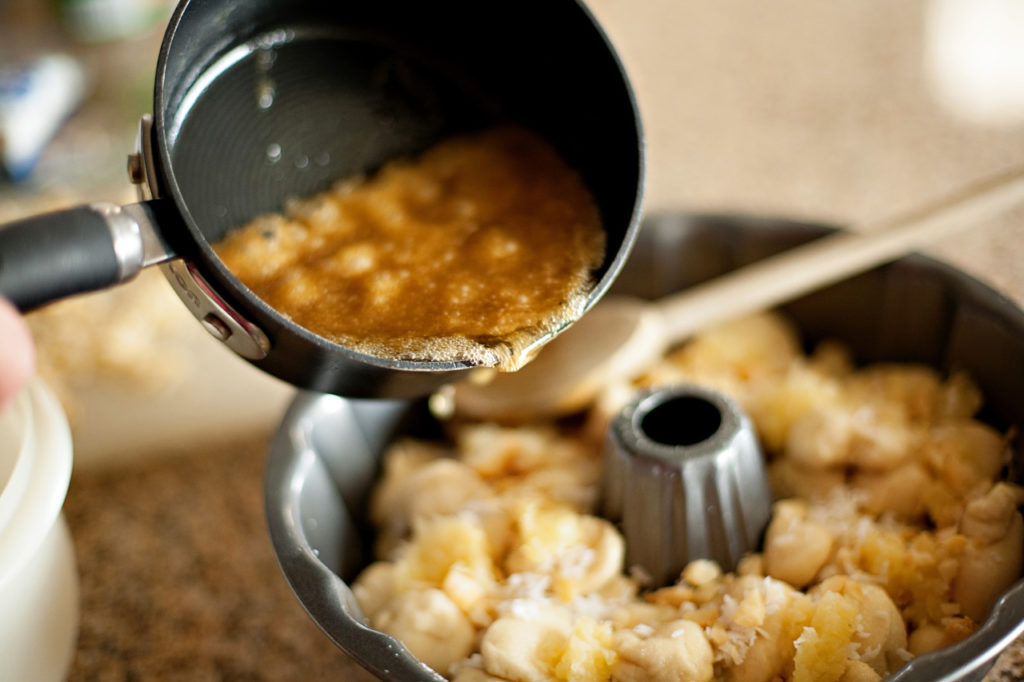 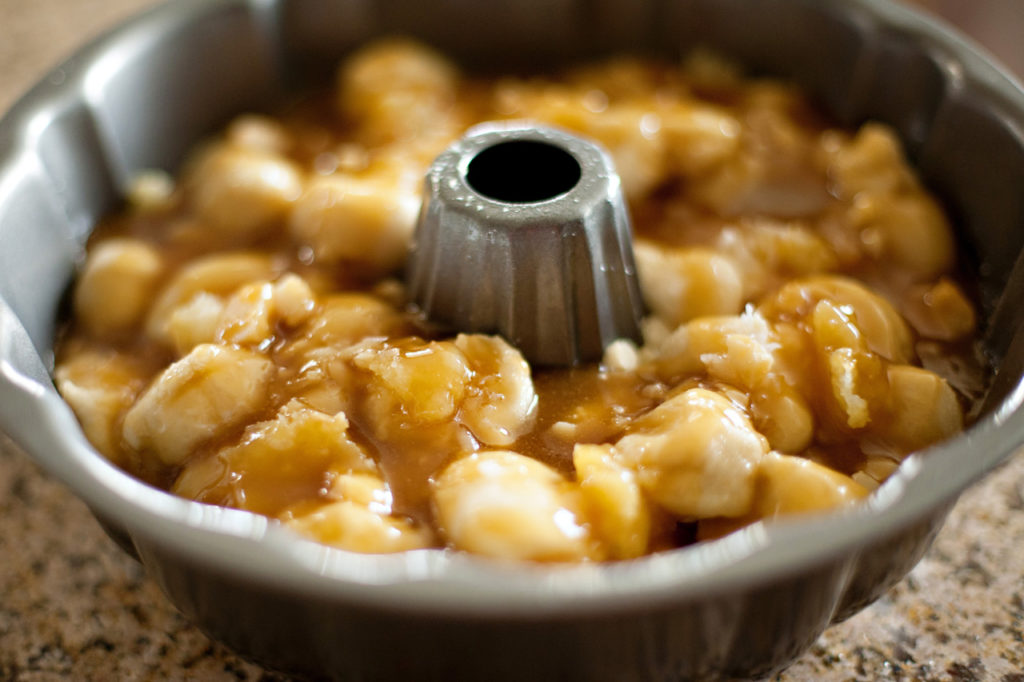 When ready to bake, just pop it into a 350-degree oven for 35 minutes and watch the magic happen. I will warn you that you might need to put some foil or a tray or oven mat underneath, because it could bubble over a little and spill on your oven floor.

Once you remove it from your oven, just let it sit for 10 minutes. Then invert it onto a serving plate and let it sit there for a few more minutes before you lift the pan off. This will give everything time to get un-stuck from the pan and for all the gooey goodness to fall down between the cracks. 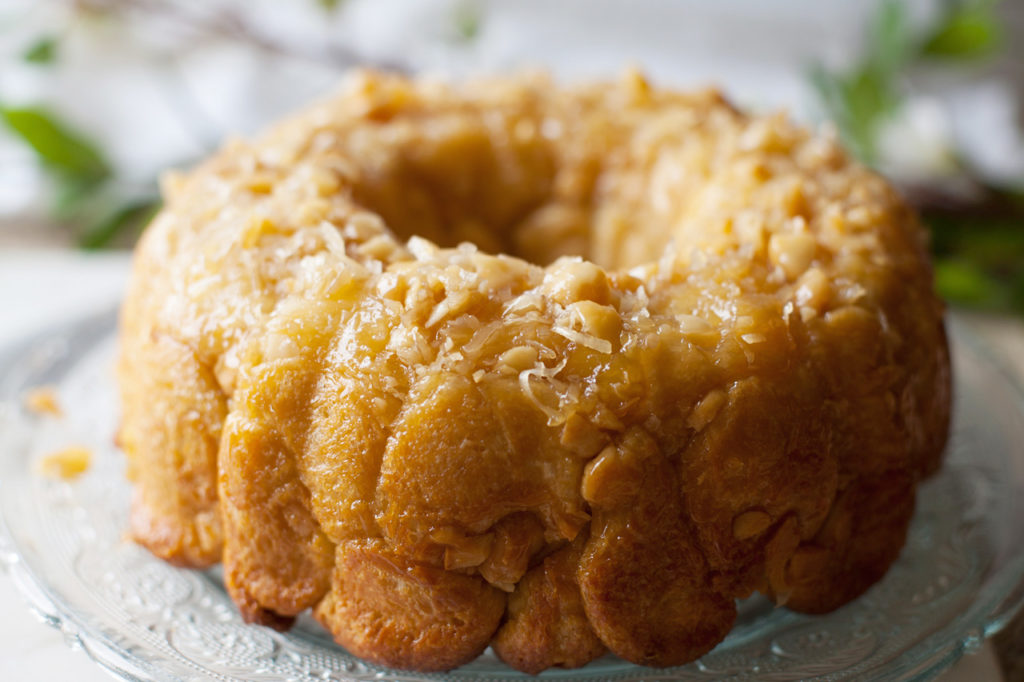 Once you lift off the pan, you will get a gorgeous, golden, tropical treat. It’s almost too pretty to eat. Almost…. 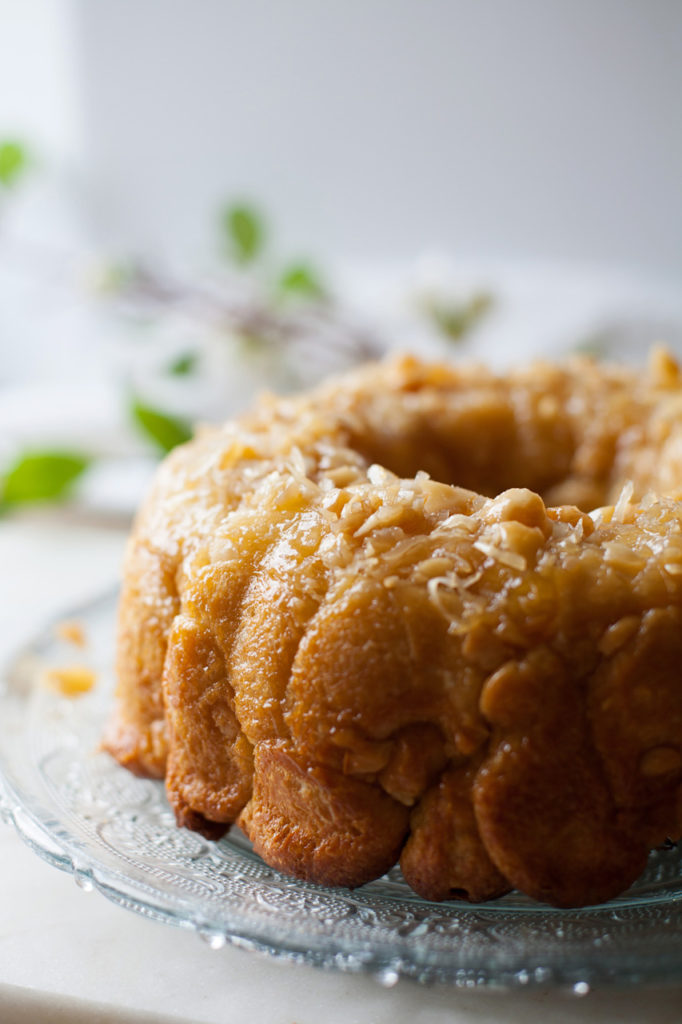 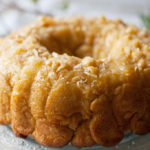 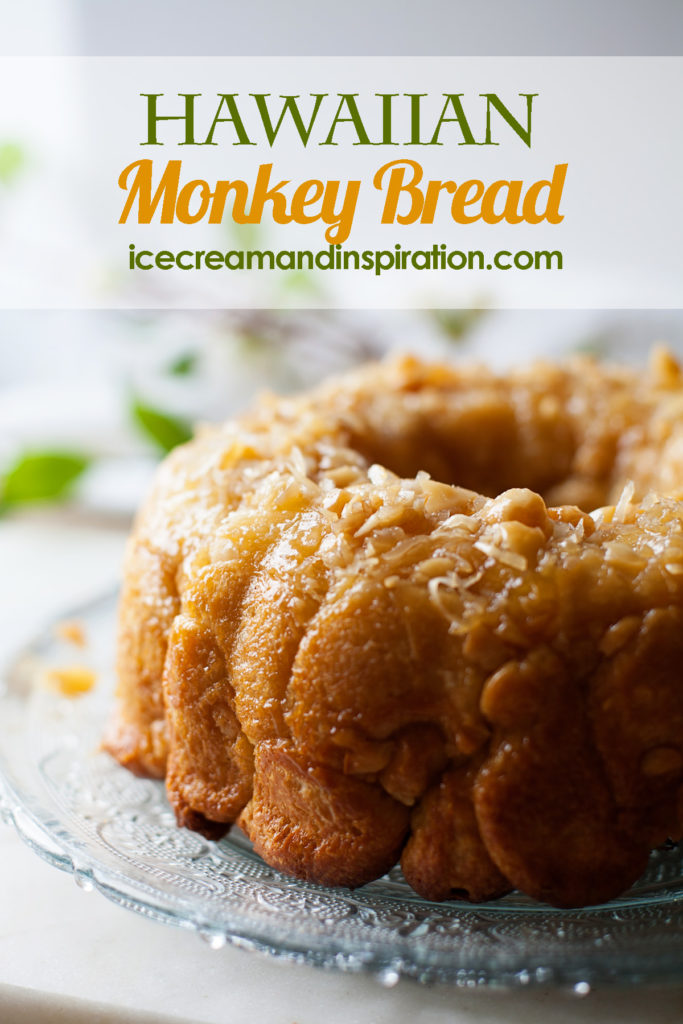