Make this traditional homemade Indian Garlic Naan Bread to go with all of your flavorful Indian dishes! Also great to use as Greek wraps, to dip in hummus, or as a base for personal pizzas! 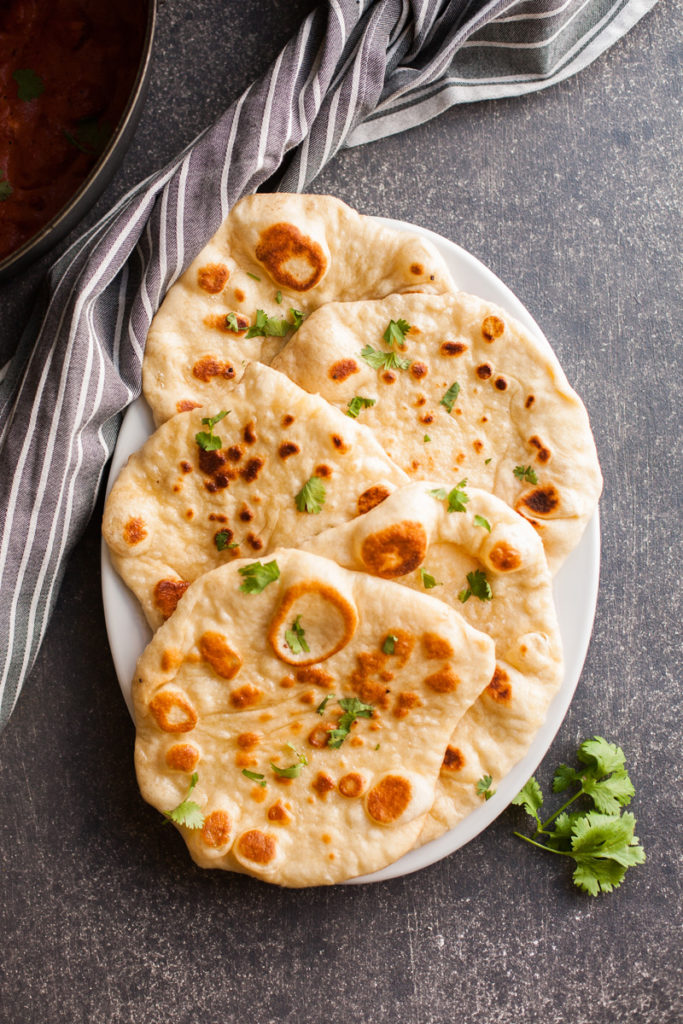 I’m not gonna lie. The best part about going to an Indian restaurant is the naan bread. Am I right? I do love all the curries and other flavorful dishes. But Indian food without naan bread–just wouldn’t be Indian food!

(By the way, even if it isn’t technically “Indian,” my Honey Mustard Curry Chicken is to die for!)

It’s not super easy to find naan bread at the store. Plus, fresh naan bread is WAY better than anything you could buy at the store. Want to learn how to make it? Sure you do. That’s why you’re here 🙂

I have a nice tutorial for you with pictures so you can follow along to this recipe for Garlic Naan Bread. 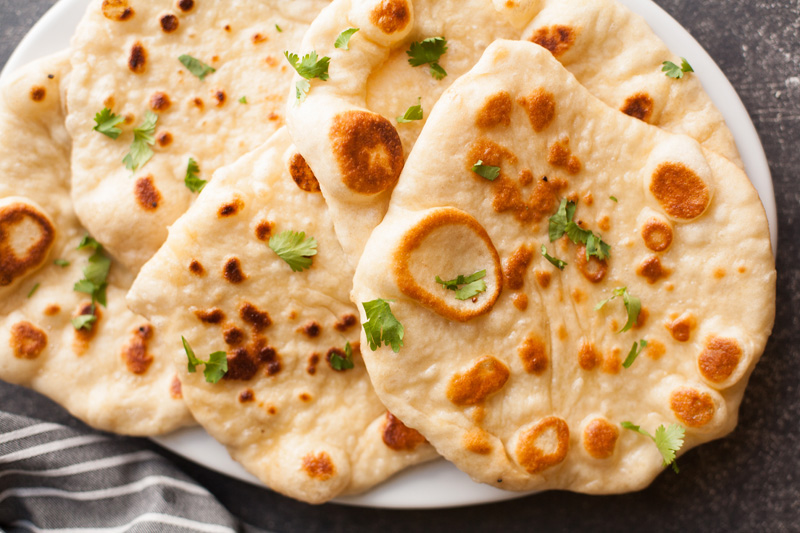 How to Make Garlic Naan Bread (or Indian Flatbread)

Put 1 cup of warm water into a bowl. Sprinkle 2 1/4 (one packet) of yeast on top. Then sprinkle 1 teaspoon of sugar on top of the yeast. Let it sit for about ten minutes until frothy.

Meanwhile, add 3 cups of flour and 1 teaspoon of salt to a large bowl or bowl of a stand mixer. If using a stand mixer, use the dough hook attachment.

Note: to quickly bring an egg to room temperature, put the whole egg into a cup of very warm (not hot) water. In about ten minutes, your egg will have become room temperature and you can use it in your recipe.

Mix everything together until a soft, slightly sticky dough forms. Add additional flour if needed, but not too much. It needs to still be a little sticky. Knead with the dough hook for five minutes or by hand for five minutes.

Leave in the mixing bowl and cover with a towel or plastic wrap. 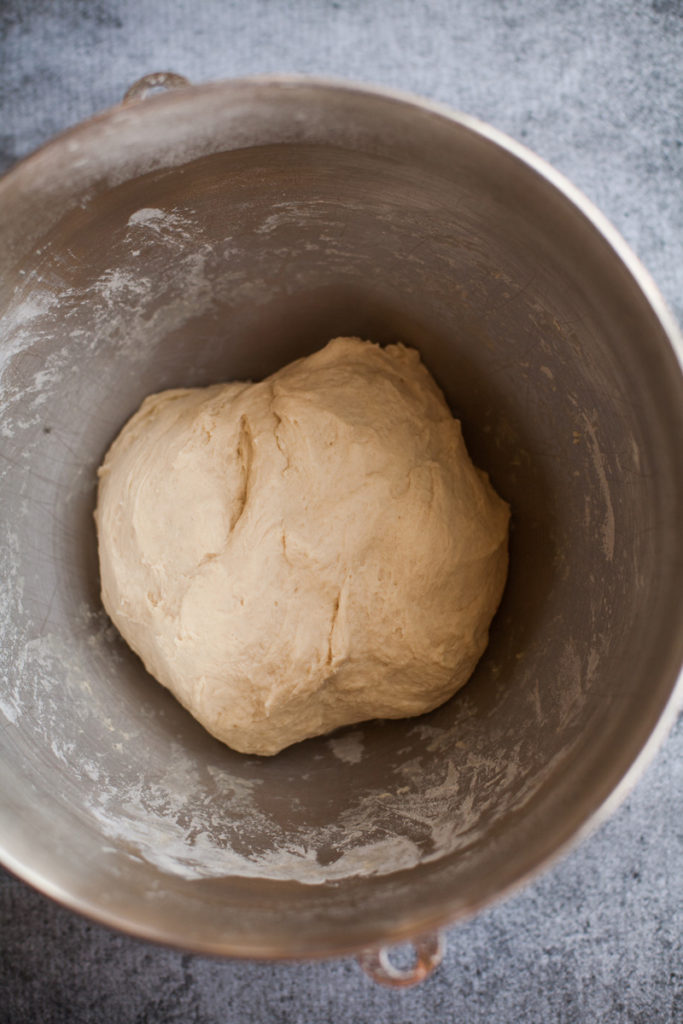 Let it sit in a warm place for about an hour to let the dough rise, until doubled in size. 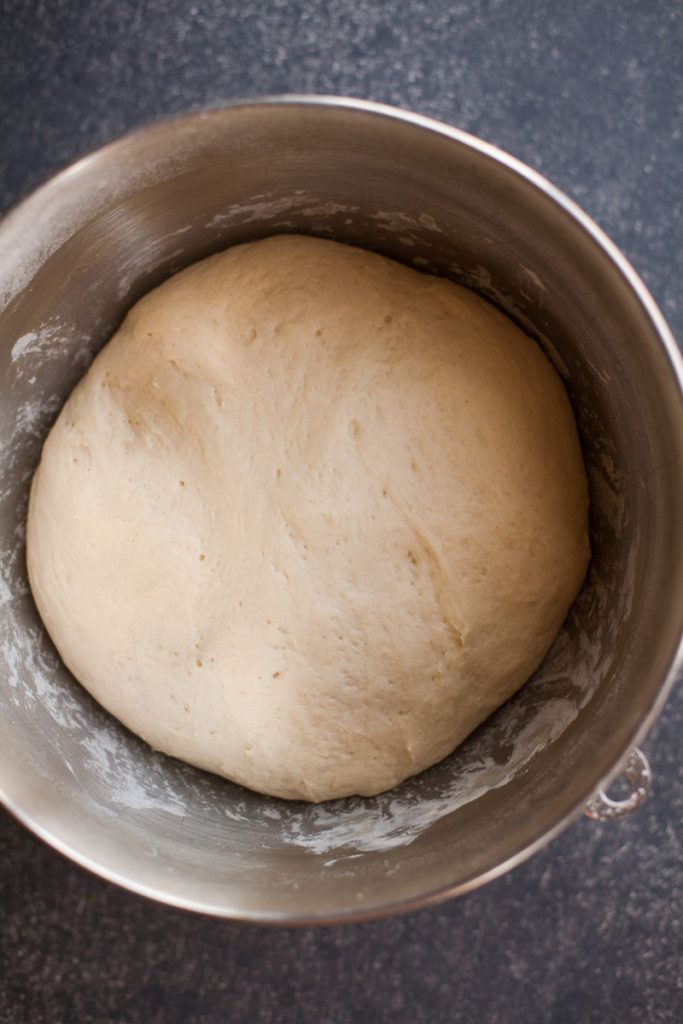 Punch it down and lay it out on a floured cutting board. Press it into a rectangular shape. Then use a sharp knife or pizza cutter to cut 12 equal pieces. 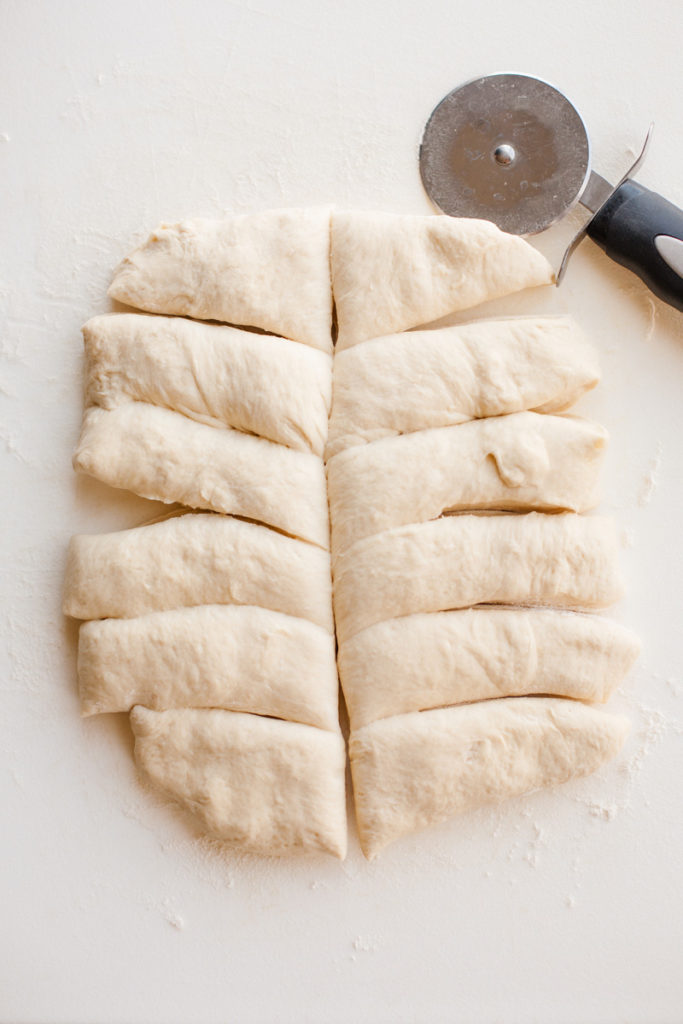 Pick up each portion and shape into a ball. Place back on the floured cutting board. 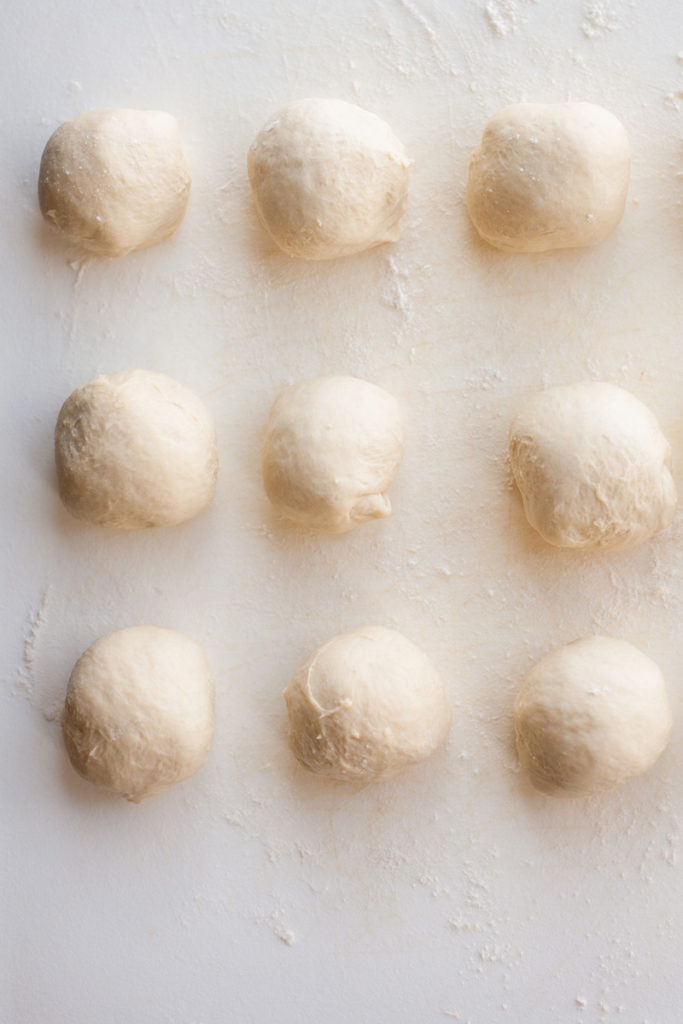 Cover with a kitchen towel and allow the balls to rise for about 30 minutes. 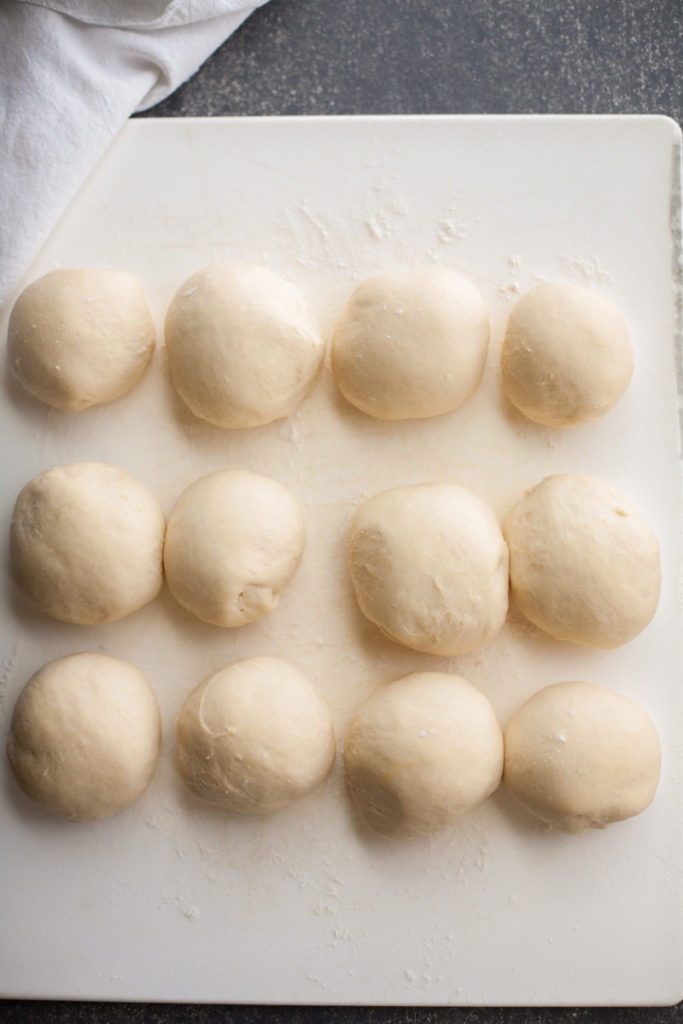 Heat a medium-to-large-sized skillet over medium-high heat on the stove. (You can also use a cast iron skillet if you prefer).

Meanwhile, melt 1/2 cup (one cube) of butter and add 2 large cloves of minced garlic to the melted butter.

Roll out one dough ball at a time on a floured cutting board with a rolling pin. Get it as flat as you can. (Ideally, you’d want this to end up in a circular or oval shape, but wonky naan bread tastes just as good as perfectly-shaped naan bread, so we’re not going to be too picky here). 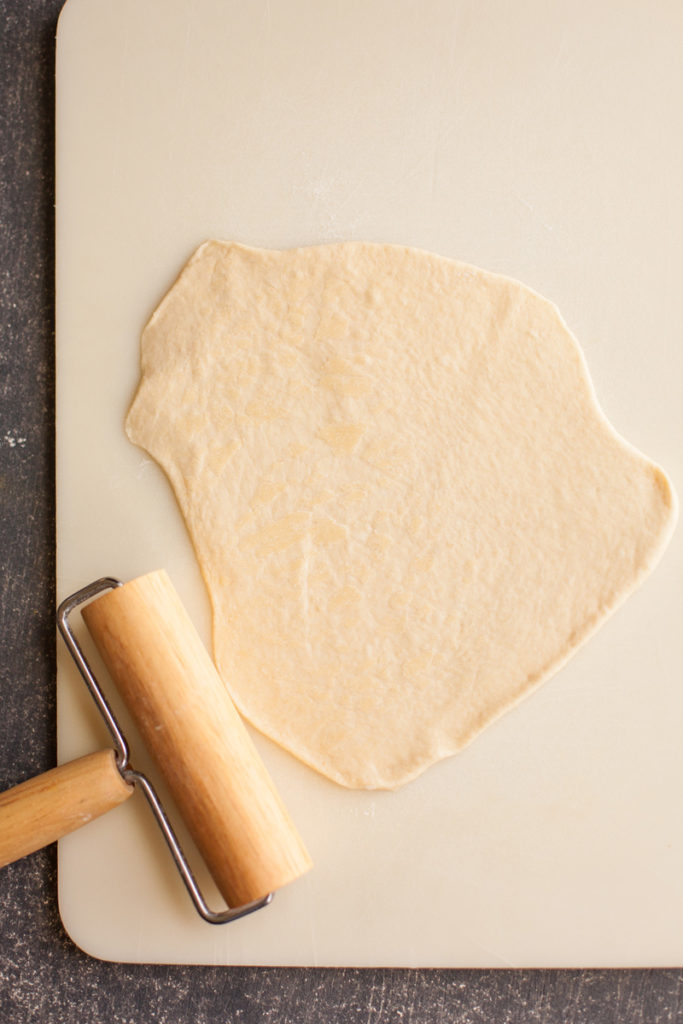 Brush your hot skillet with the garlic butter and immediately place the rolled naan dough into the pan. Then brush the top of the dough with more melted butter.

(If you don’t want to use butter, you can use olive oil).

When you see large bubbles form, flip it over. Each side should have lovely golden brown bubbly spots.

Remove from the skillet and set on a plate. You can sprinkle with additional garlic powder if desired. 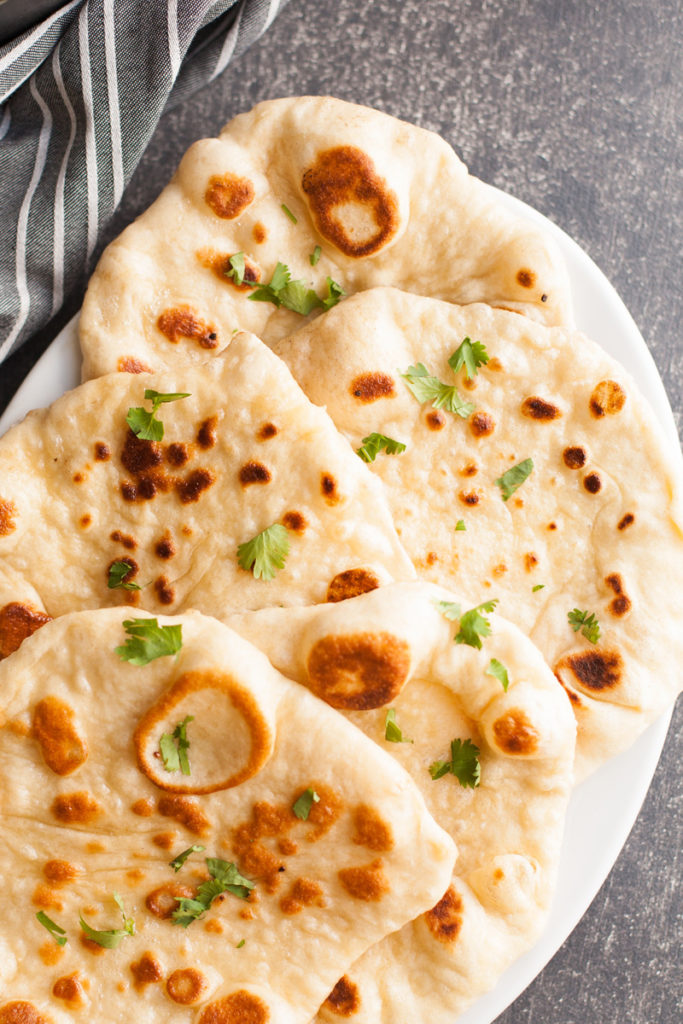 Now you can eat this lovely, buttery bread with all your Indian dishes! Store your leftover homemade garlic naan at room temperature in an airtight container for up to two days.

Can naan bread be used for pizza?

Yes! If you have leftover naan bread, you can top it with pizza toppings and heat it up in the oven. Just bake at 350 for 5-10 minutes until the cheese is melted!

Can naan bread be reheated?

The best way I’ve found to reheat naan bread is to put it on a foil-lined tray and put it in the toaster oven. Just turn on the toast setting, or set it to 350 and let it heat until the butter is bubbly. Because of the butter, it’s best to put the naan on foil or a tray so that the butter doesn’t melt and drop to the bottom of your toaster oven. You can also use this method in a regular oven.

I don’t recommend the microwave for reheating. When done this way, the naan bread loses the heat very rapidly and becomes tough.

Can naan bread dough be made in advance?

How is naan bread cooked?

Traditionally, naan bread is cooked in a tandoori oven. This is a clay oven. Since most of us don’t have access to one of those, you can also just bake them in your regular oven. However, if you have a lot to bake, this will take a long time since you can only fit about two naan breads at a time on a baking sheet.

I’ve found the easiest way is to just cook it in a frying pan on the stove, as I indicated in my instructions above. You can also cook it on an indoor grill (like a George Foreman Grill) or panini press.

Now that all your naan-related questions have been answered, it’s time to make some!

And don’t forget the Chicken Tikka Masala and Indian Rice to go along with it! 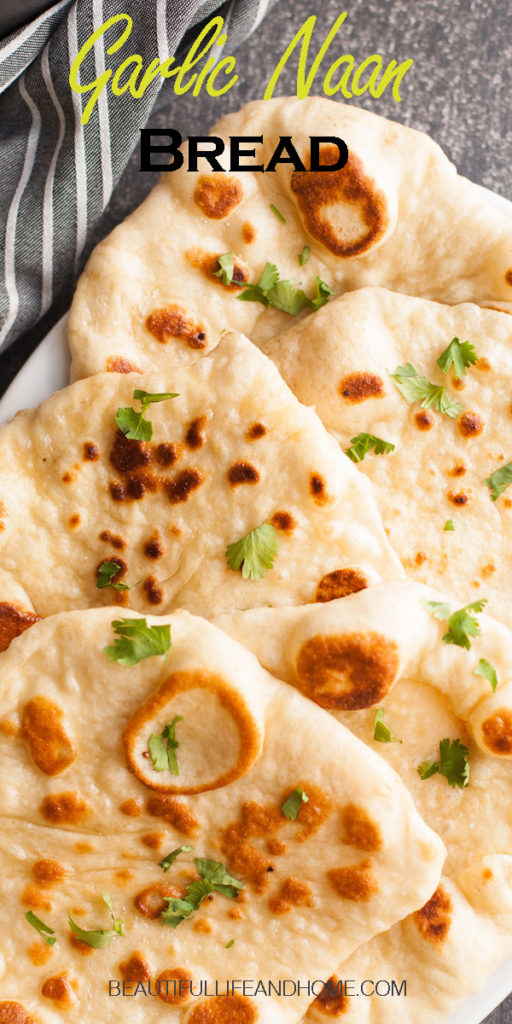 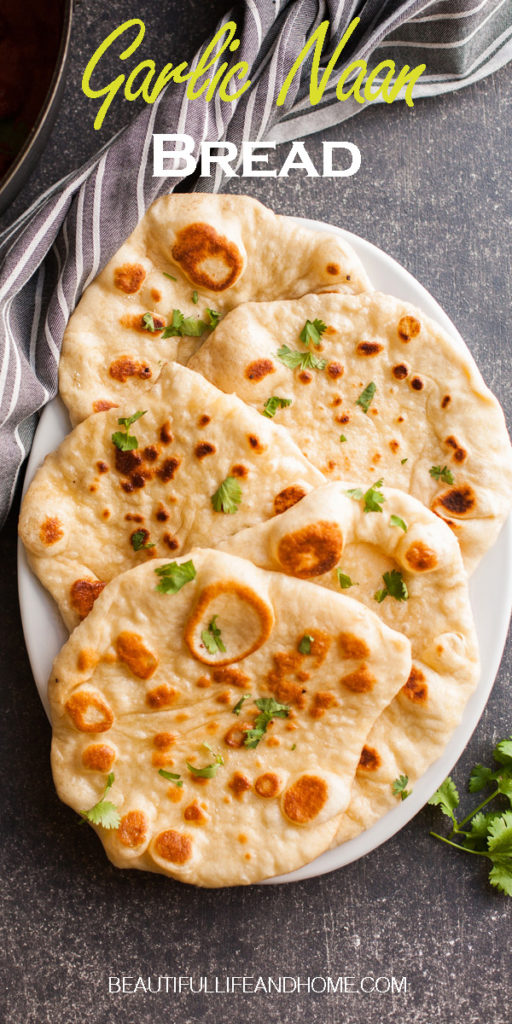