Why are they called “Funeral Potatoes?” I’m so glad you asked! Read on to learn more and to get the recipe for these creamy, cheesy, to-die-for potatoes! 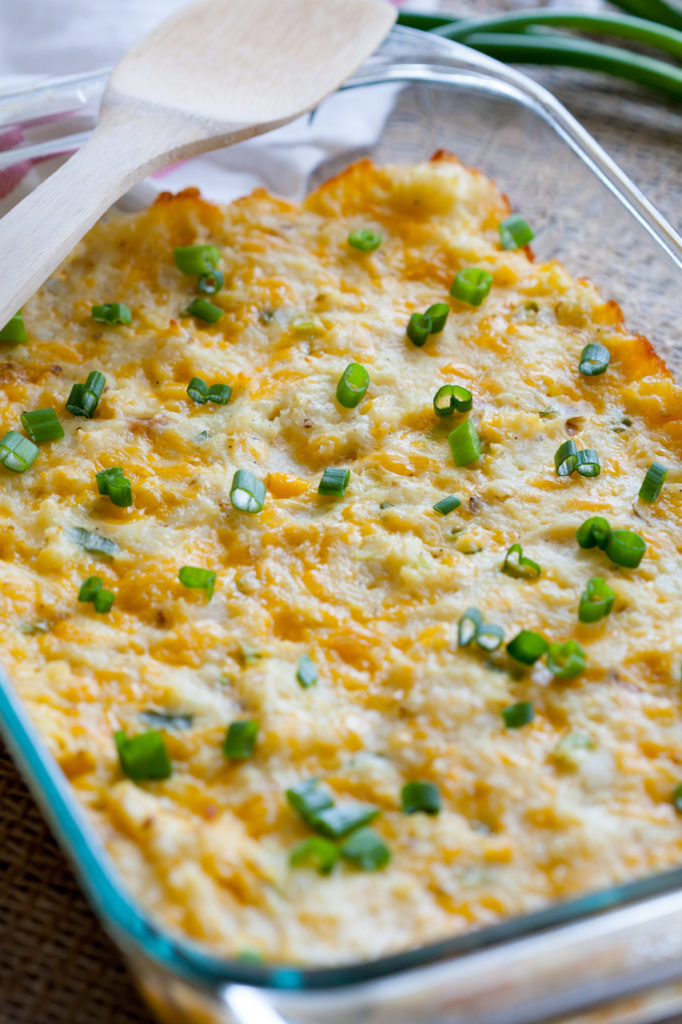 When I was in my mid-twenties, my grandmother died. We used to visit her in Star Valley, Wyoming. Grandma had two great things at her house–the most delicious tap water, and Fruit Loops.

Grandma grew up on a farm and had four children. But my grandpa died in his mid-50s, leaving my grandma to run the farm. She also became an elementary school teacher to support her family.

When I was training to be a missionary for my church, I met a young man from Star Valley. Since it’s such a small place, I wondered if he knew my grandmother. Perhaps she had even been his teacher. I asked, “Did you know Wilma Lovelace?”

His mouth dropped open in surprise and he said, “You mean THE CLAW?” It turns out he did know her, and that she used to go around using the Vulcan Nerve Pinch on students who were misbehaving. This was long before Spock adopted the practice. Although I doubt my grandmother rendered her students unconscious, she certainly gained herself a reputation. And even though I had never experienced her vice-like grip between my neck and shoulder, I could totally picture her doing it.

But grandma was endearing to us because she let us eat cereal that was strictly forbidden at our house. She had fun games you couldn’t find in stores. She always had lots of cookies. And we thought it was fun to sleep on her fold-out couch.

She used to get teary-eyed and tell us how proud she was of us. Even though we were young and it made us feel a little awkward when she said it, we still loved her.

When she died, my many cousins and I gathered at her funeral. I don’t know how they do things in other churches, but in the Mormon church, the Relief Society (the women’s service organization) always makes a dinner for the family of the deceased. And at every Mormon funeral, like my grandmother’s, you will find these Funeral Potatoes. I’m pretty sure they started out being called something else, like “Cheesy Potato Casserole,” but after showing up at so many funerals, their name was changed. Everybody in Utah knows what Funeral Potatoes are. People who are not Mormons are generally confused upon hearing the name.

But let me tell you that they are aptly named, because they will take you straight to heaven. I personally think this is the best possible way to eat potatoes, and I could eat them every day.

What is in Funeral Potatoes? Well, many people use frozen hash browns. But I like to just bake and grate my own potatoes. Then I add sour cream, onions, cream of chicken soup, cheese, and some salt and pepper. Mix it all up, spread it in a 9×13 pan, bake it for 45 minutes, and you’re done!

Please don’t wait until somebody dies to try these Funeral Potatoes! They go perfectly with ham and are great when you need to feed a crowd (like during the holidays). 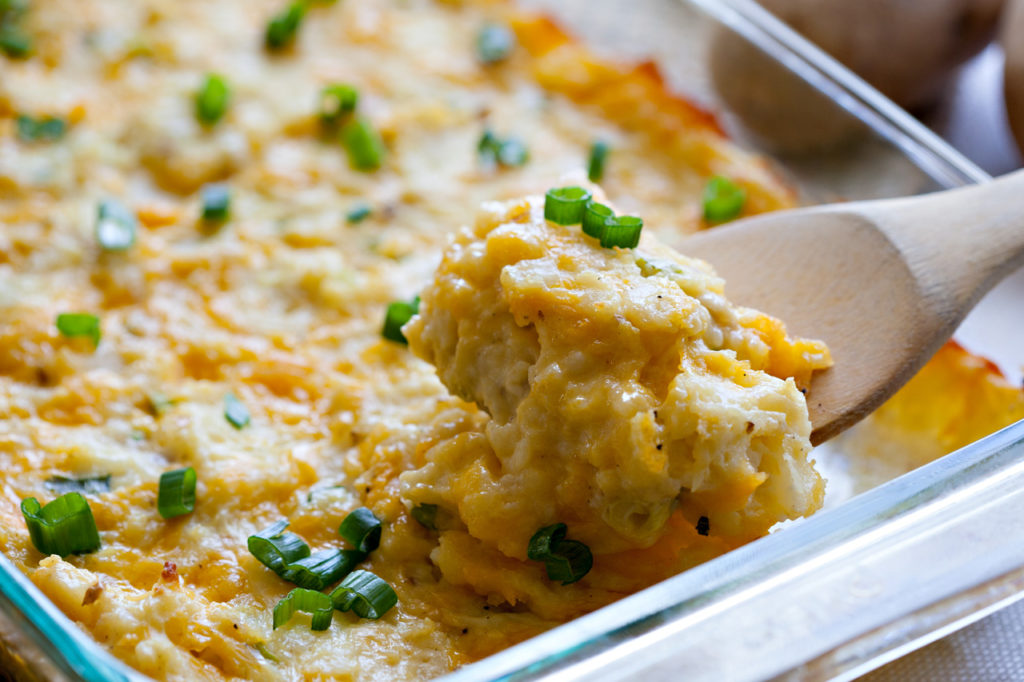 Below this recipe for Funeral Potatoes, you’ll find suggestions for other great sides. 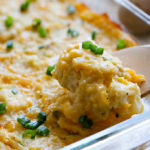 Here are some other great sides that go well with these Funeral Potatoes! 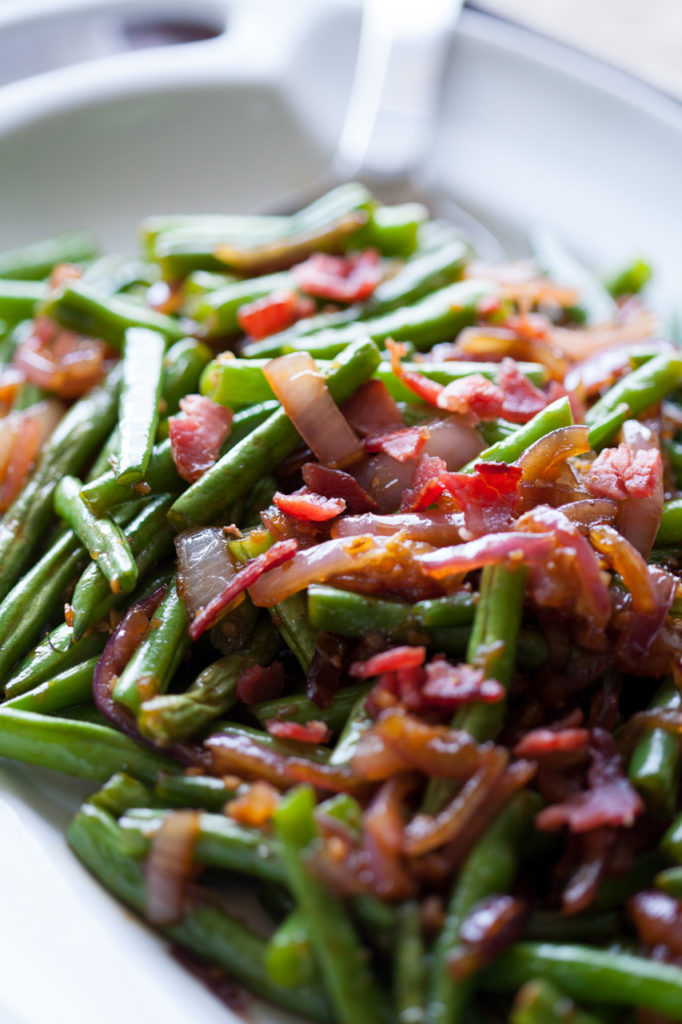 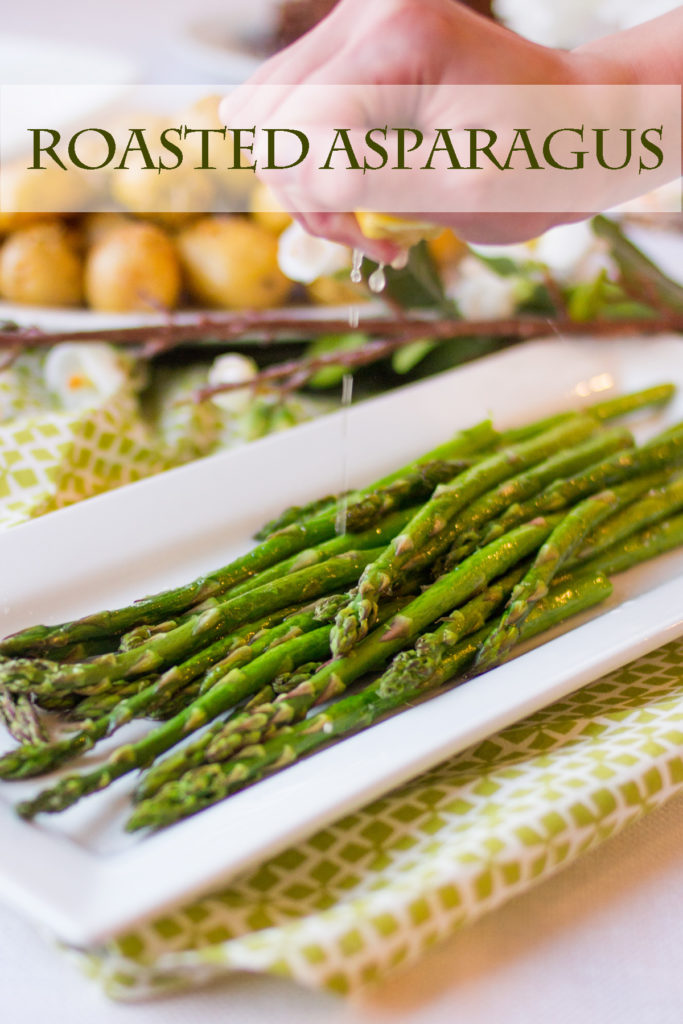