This Corned Beef Casserole is the perfect dish for Saint Patrick’s Day! It contains the classic Irish ingredients of corned beef, cabbage, and potatoes, along with a creamy sauce. 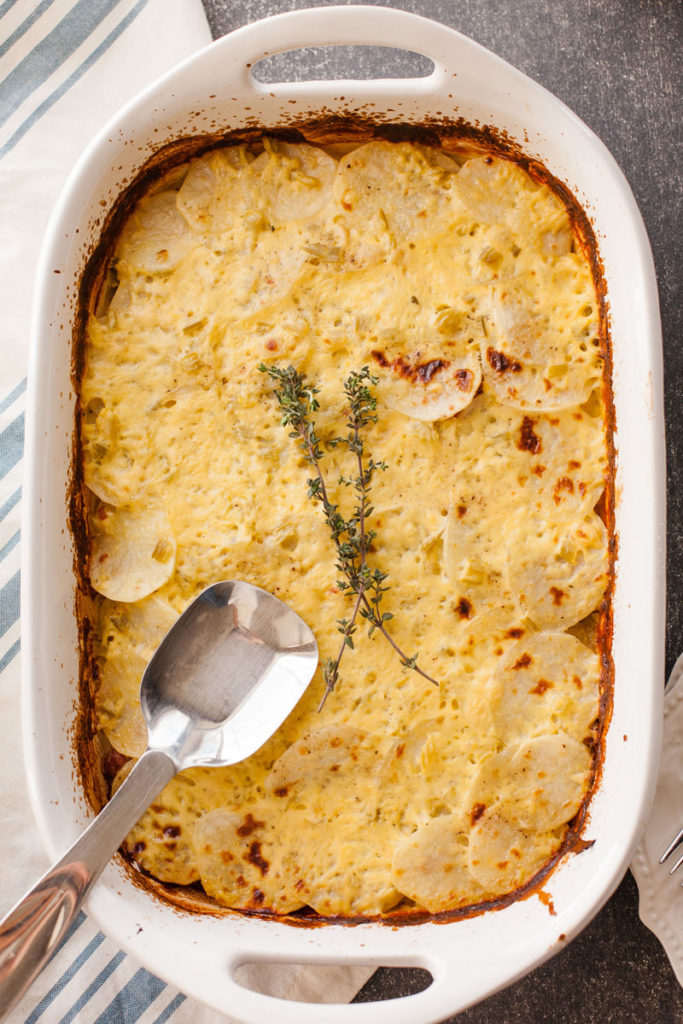 You guys, I have been wanting to share this creamy corned beef casserole recipe with you for YEARS. It is one of the first recipes I discovered after my husband and I got married nearly 19 years ago! We both fell in love with it and I make it every year around St. Patrick’s Day.

It’s a canned corned beef recipe that I found in a book my husband had called Where’s Mom Now That I Need Her? I have altered the recipe to make it easier and tastier 🙂

But first, what the heck is canned corned beef, and is it really Irish?

Corned beef is made from the brisket of the cow. This is a tough cut of beef that needs long, slow cooking. Corned beef in the can has the appearance and texture of ground beef.

“Corn” actually has nothing to do with the beef. Rather, it is used to describe the size of the salt crystals traditionally used to cure the meat.

You can find canned corned beef with the other canned meat in your grocery store.

How to Open a Can of Canned Corned Beef

Corned beef comes in oddly-shaped cans with an unusual method of opening. You’ll see a little “key” attached to a small piece of metal sticking out from the side of the can. Remove the key and reattach it to the metal upside-down so that the top of the key extends over the top (or bottom) of the can.

Then start twisting the key and rolling the metal. Keep going all the way around the can until you can remove the top (or bottom, as the case may be). 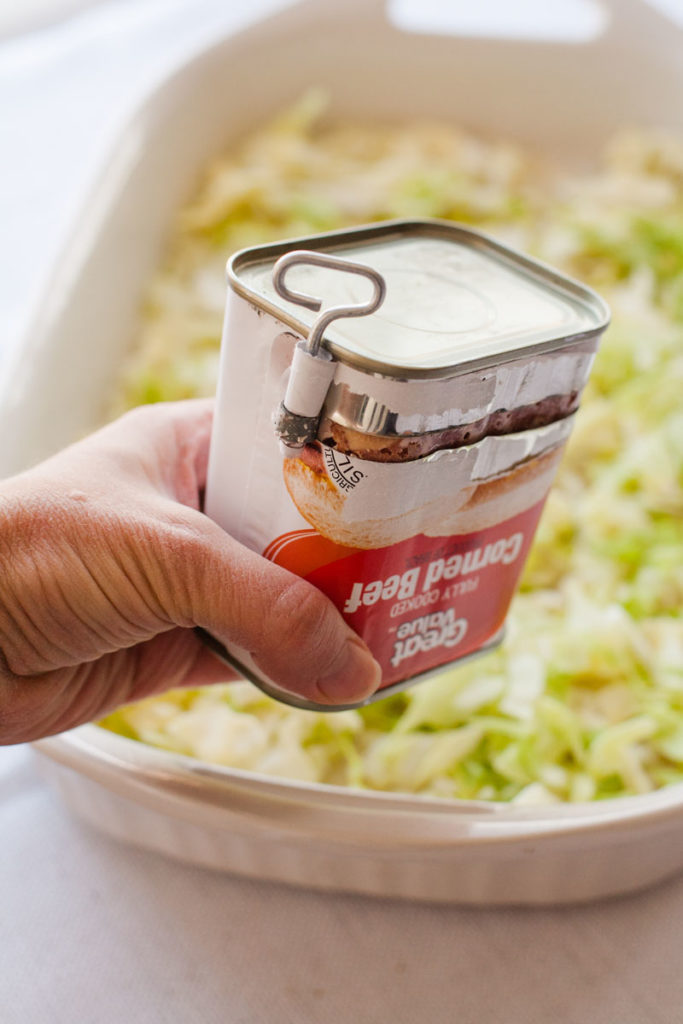 I don’t think anybody actually wants to do this. I think people are just more concerned about whether or not it’s fully cooked, since it retains its characteristic pink color, even when cooked.

Canned corned beef is already fully cooked, so no worries about eating any raw meat. 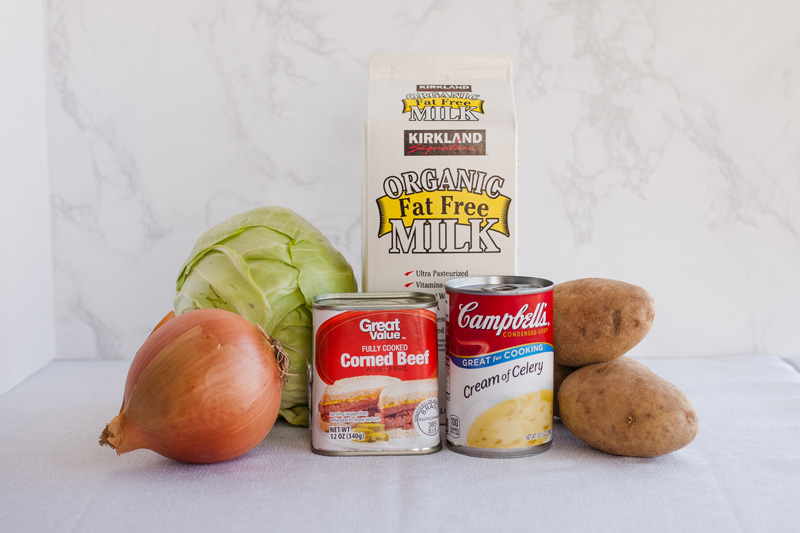 How to Make Corned Beef Casserole

First, get a 9×13 casserole dish. Lightly spray the bottom with cooking spray.

You’re going to need to peel and thinly slice 3-4 small potatoes. I love to use my OXO mandoline. (It’s called a “Cabbage Slicer” on Amazon). It has a little dial on it so you can adjust the width of your slices. 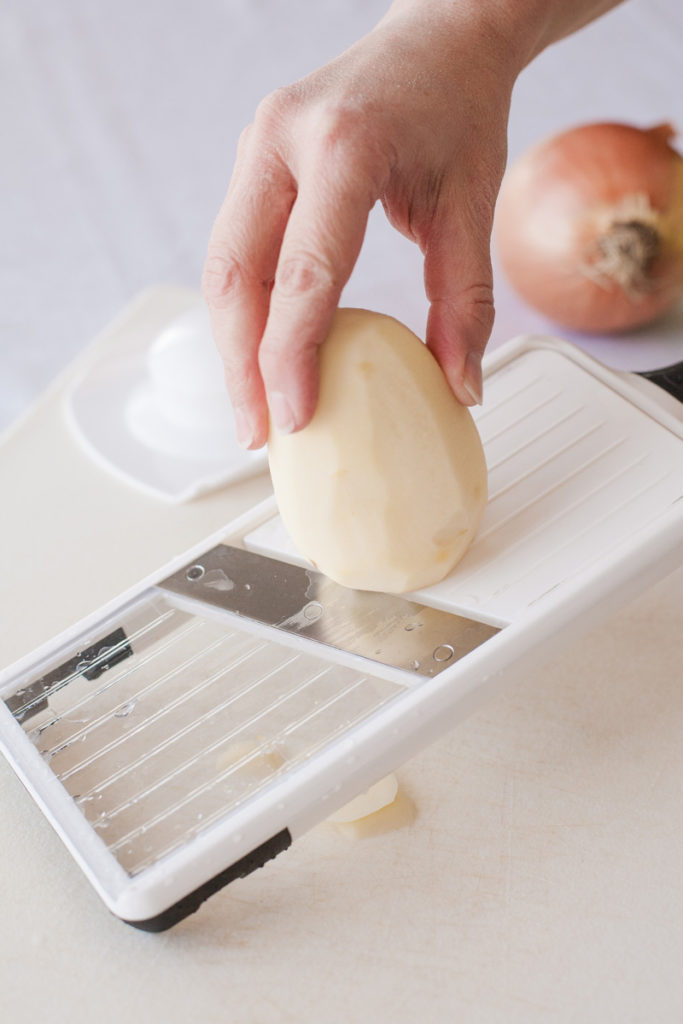 I put one layer of potato slices on the bottom of the dish. 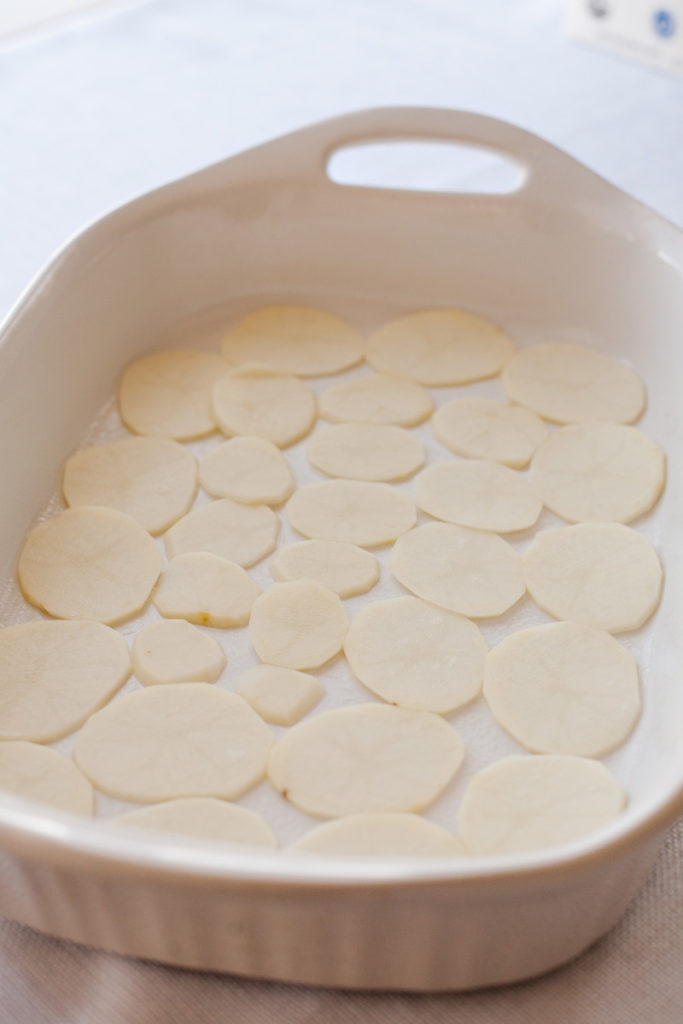 Next you sprinkle the potatoes with salt and pepper and add chopped onion. 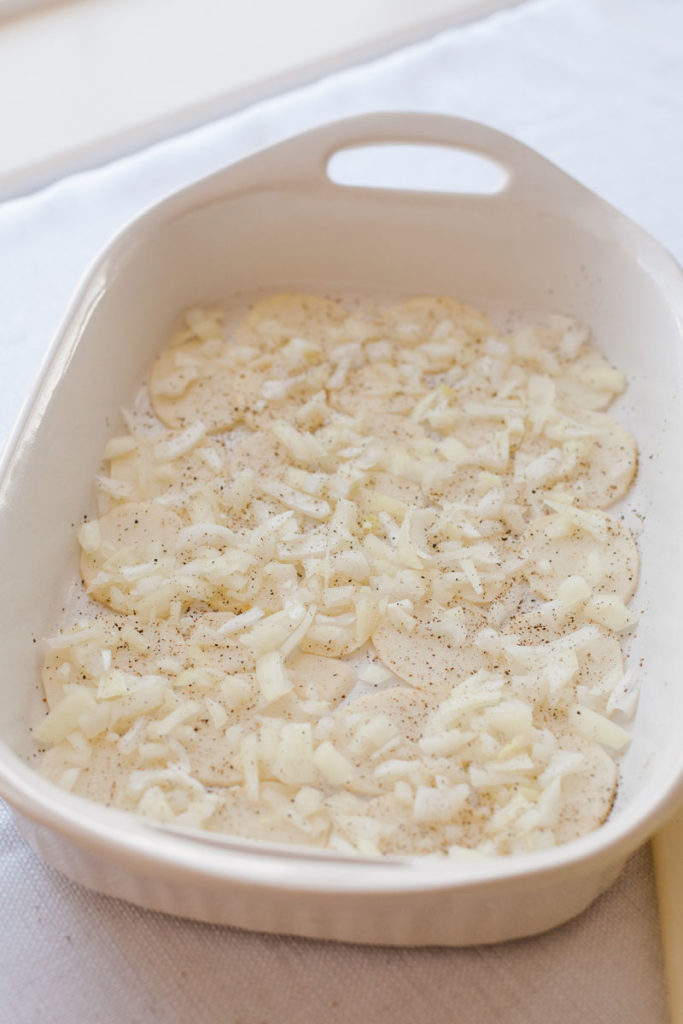 Now it’s time for the cabbage. Ironically, I did not use my “cabbage slicer,” but opted for a big knife instead 🙂 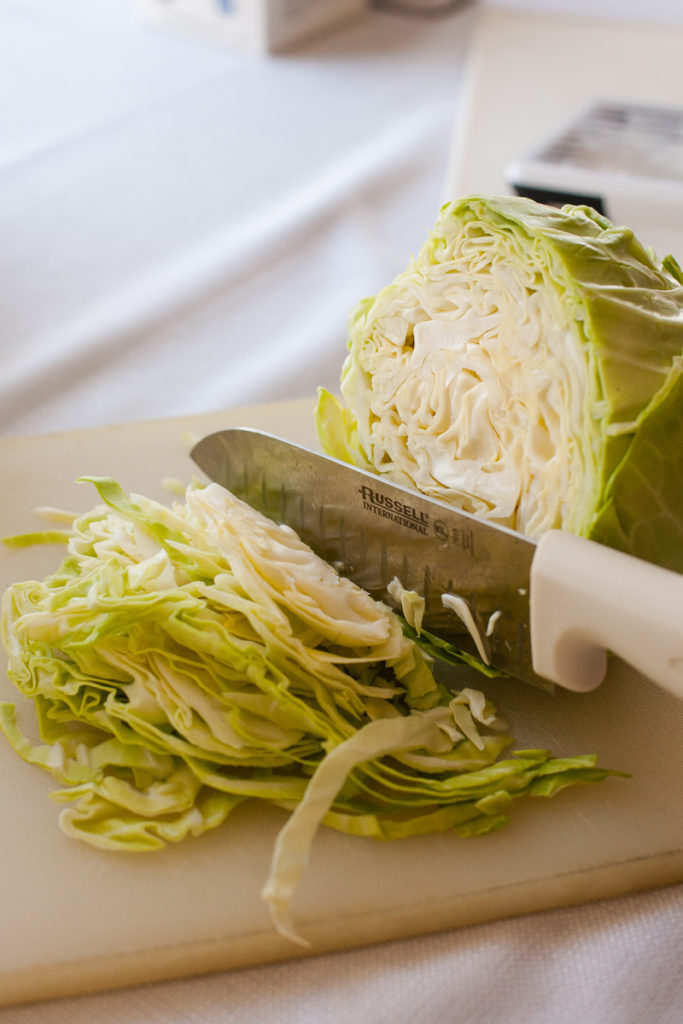 Just chop that up as thinly as you like and sprinkle the shredded cabbage on top.

Now it’s time for the corned beef. After you’ve opened the can, scoop it out with a spoon and then use your fingers to crumble it over the top of the other ingredients. 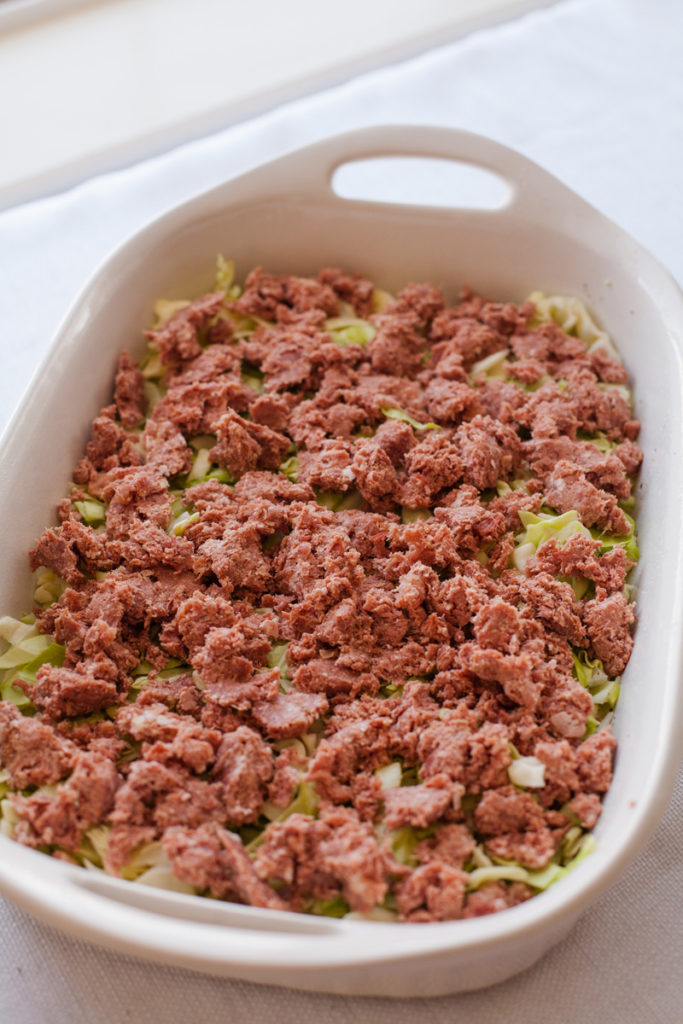 At this point, I got fancy and arranged the remaining potato slices in a pretty pattern over the top. But as you can see from the final result, you can’t even see the pattern after it bakes. So don’t worry about making the potatoes look fancy 🙂 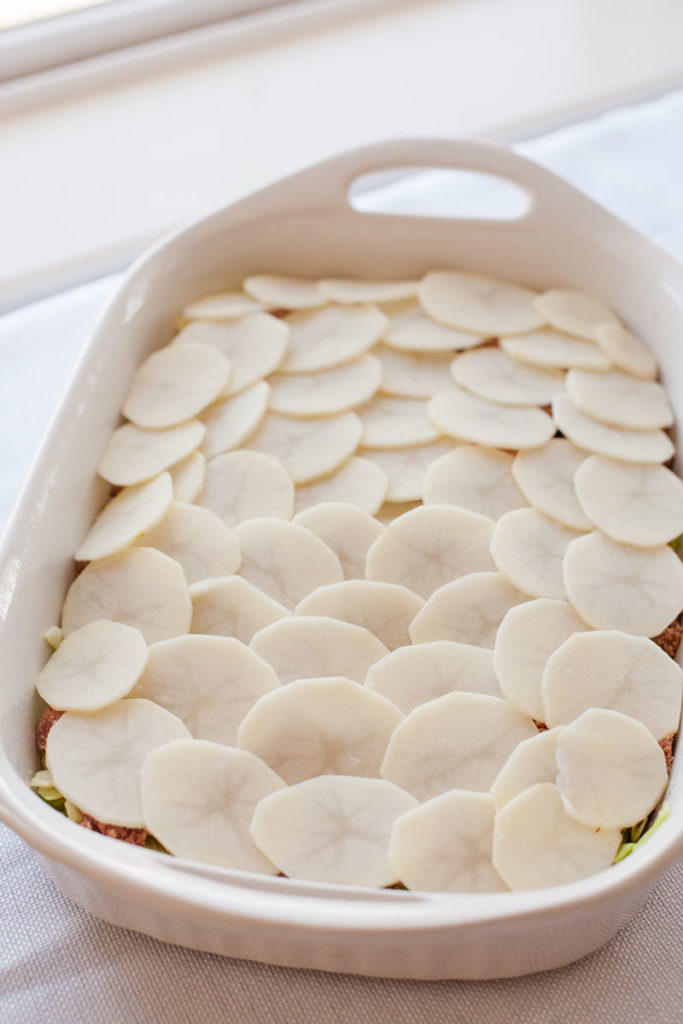 Now mix together the Cream of Celery Soup, milk, and mustard in a bowl and pour it over the top of the potatoes. You can see that I also sprinkled salt and black pepper on top of the potatoes. However, the corned beef is pretty salty, so you may want to omit the extra salt. 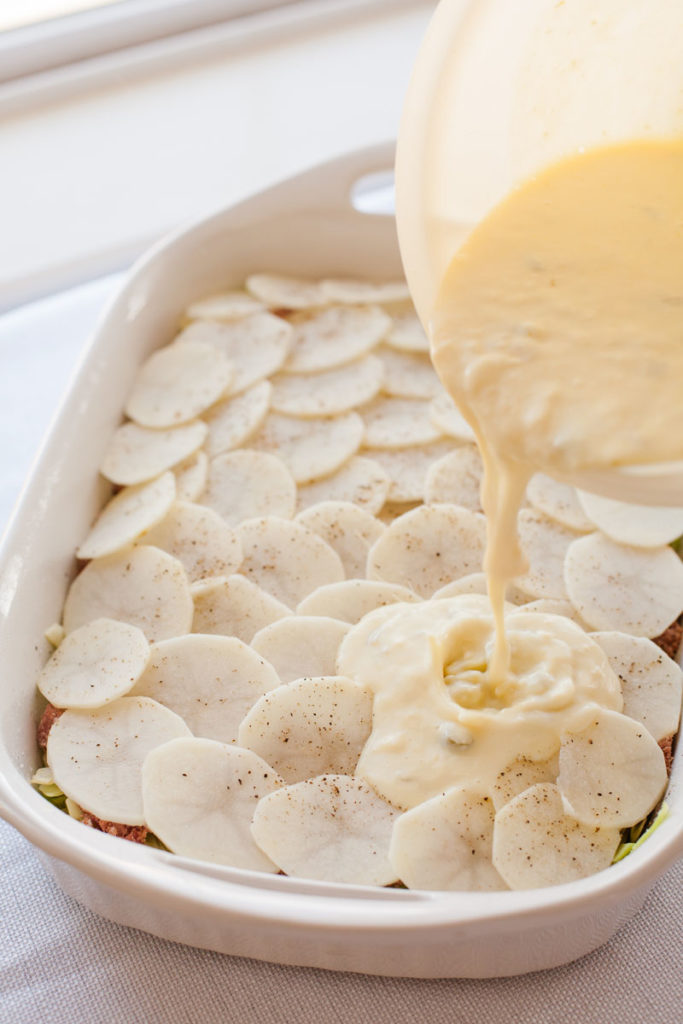 Now just bake it, covered, at 375 degrees for 1 1/2 hours. After that time, I removed the foil and turned my broiler on to “high” for 2-3 minutes to get some nice golden brown spots on the top, but this is totally optional and is strictly for looks. 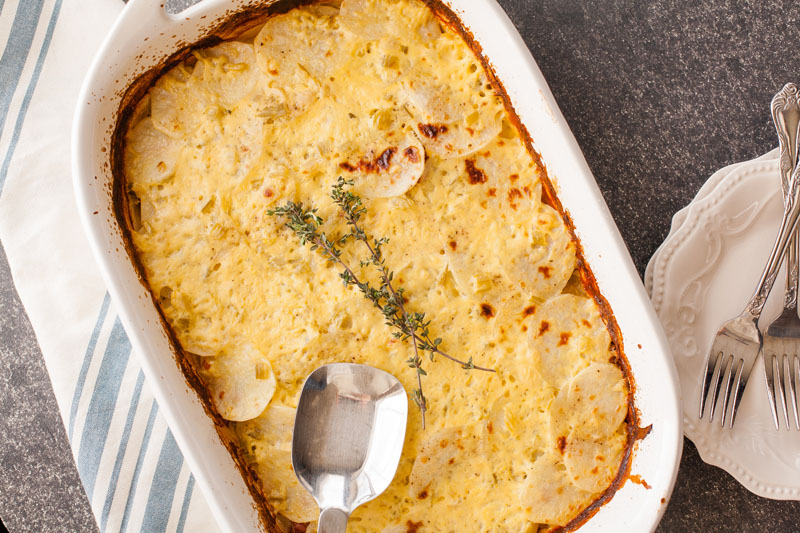 Let the casserole rest for about ten minutes before serving. The ingredients do shrink down quite a bit during baking, so the casserole is not very thick. Feel free to pile a lot on your plate! 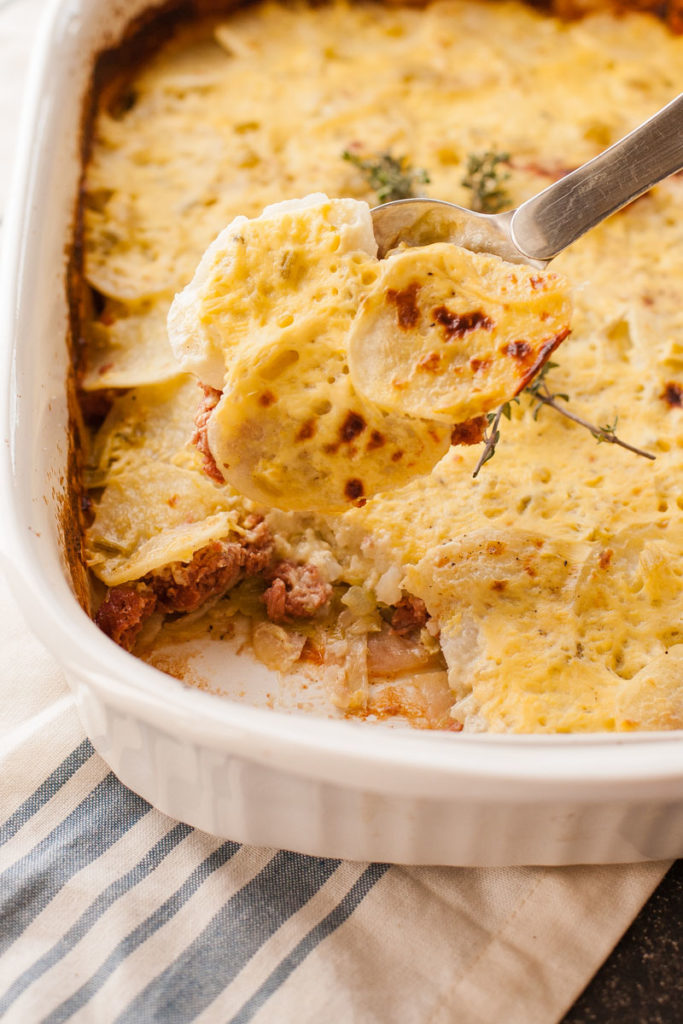 You may wish to omit the salt on the potatoes, as the corned beef is already quite salty. 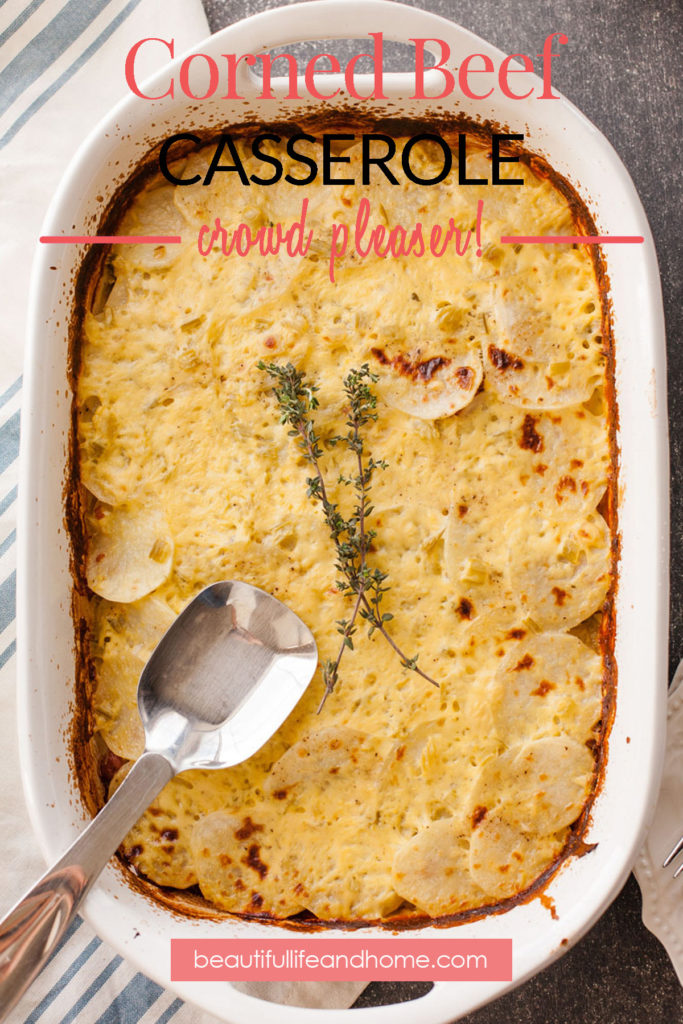 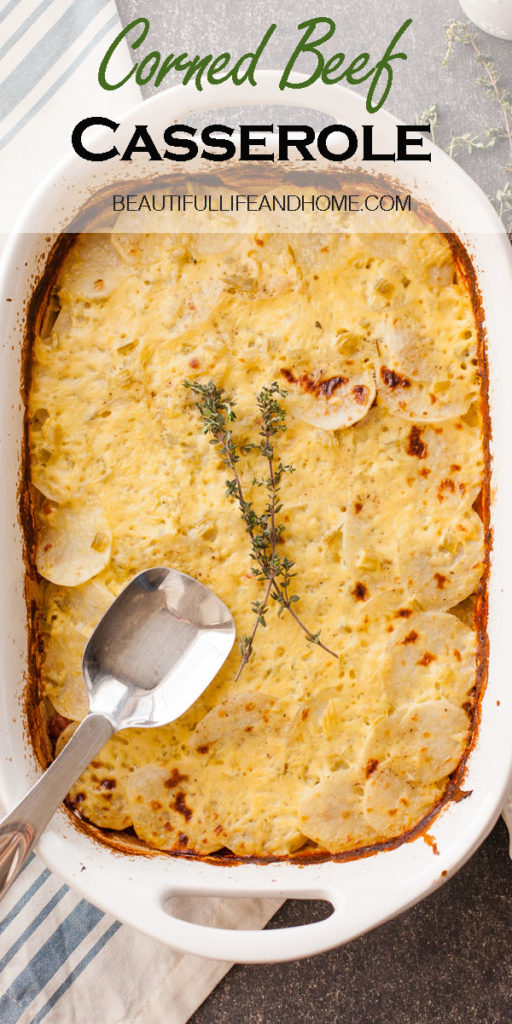